Retrofitted prior to its latest mission, the Chariot class USS Za now features a large Science complex similar to those found on the latest ships of the line such as the Odyssey class and the Vesta class. Many of the major labs and facilities employed by the Science department are found in this complex on Deck 12, though smaller multipurpose labs are strategically located throughout the ship. 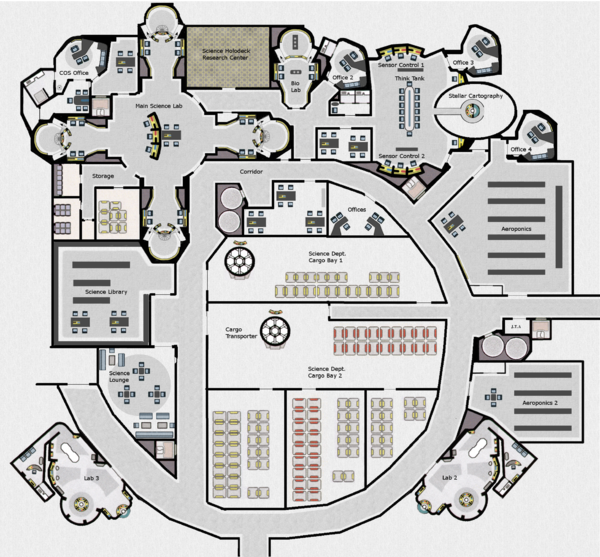 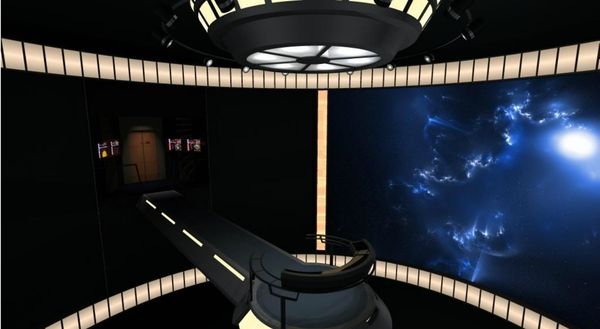 Situated in the Science complex, this is where the maps that keep track of every known star and planet are located. The lab physically resembles a three-story chamber with a catwalk extending to the middle of the room, where it supports a circular platform and 270° of control consoles. The walls of the chamber are a series of specially-curved medium wall-embedded displays that join together into a seamless 360° display. Modern stellar cartography labs also incorporate OHD clusters, which permit the display of stellar maps in three dimensions. This process can be a trifle disorienting to some individuals, but most have little difficulty, and being able to view space as it truly is can prove very beneficial for many investigations. Most vessels contain, at most, a single stellar cartography laboratory, which is put to use every hour of every day updating old maps, creating new ones, and performing special searches. Each vessel is expected to double-check its maps as it travels, updating them as necessary and sending the information back to Starfleet Command on a daily basis. The lab possess a heavy-duty EPS linkage for the occasional holographic display, priority access to no less than three computer core modules, and a slew of dedicated subprocessors. 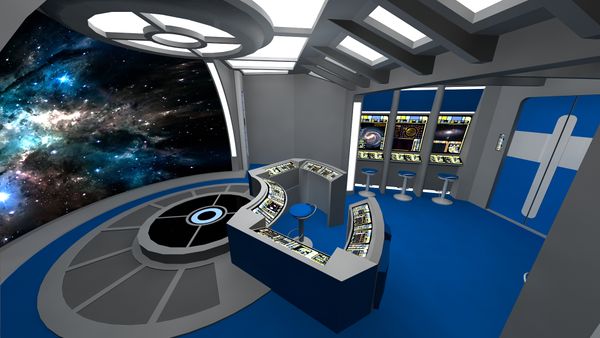 Astrometry is the study of the positions, motions, and magnitudes of stars. As such, the astrometrics lab (or just 'Astrometrics') functions as a more hands-on version of the Stellar Cartography lab. Where the latter would be used to create maps of the stars and plot courses involving large numbers of variables and stellar bodies, an astrometrics lab typically deals with much a much smaller sample size. The narrower focus allows this laboratory to be much more precise in its investigations, studying individual stars, their characteristics (magnitude, position, polarity), and how they interact with the universe (motion, flares, novae).

The average astrometrics lab typically possesses two dedicated subprocessors, at least a half-dozen science consoles, a handful of workspaces with LCARS terminals and wall-embedded displays, and a large wall-embedded display that curves in imitation of the spherical display in a stellar cartography lab. 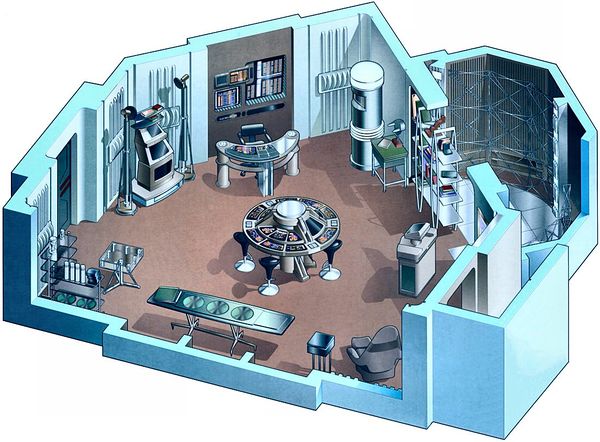 As xenobiology is an interdisciplinary science that applies the methods and theories of the physical sciences to biology, a xenobiology laboratory requires a great deal of flexibility. One moment, powerful neural scanners might be used to map alien brain patterns; the next, a cellular synthesizer could grow special membranes to filter toxins from a patient's bloodstream; and the next, holographic models may be constructed of a replacement heart or limb before the prosthetic is constructed on-site. A dedicated subprocessor is provided to drive the specialized equipment, along with multiple LCARS terminals, a medium wall-embedded display, OHD clusters, and an engineering-grade replicator.

Contrary to popular belief, cybernetics does not deal specifically or solely with cyborgs, robotics, or artificial replacements of organic tissue. In scholarly terms, it is the study of communications and control, typically involving regulatory feedback, in living organisms, in machines, and in combinations of the two. This can include a nervous system, optical data network, or even a government. As cybernetics is a largely abstract science - that is, it is not grounded in any one empirical field - the cybernetics laboratory is often a redressed nonspecific laboratory. Typically, the only addition is a dedicated subprocessor to drive complex computer models. Every now and then, however, models of communication and control systems will be fabricated elsewhere and brought in for closer study. 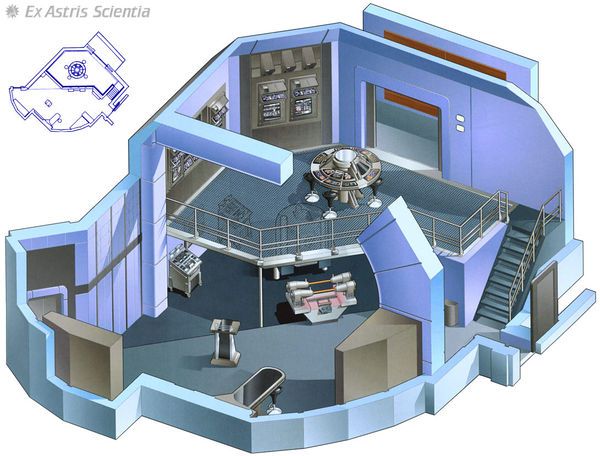 Not every scientific advance can be done through electronics or quantum mechanics. Sometimes, a scientist needs to push around some sort of compressible medium (water, air, etc..) and that is where fluidics comes in. These studies are especially important on the nanoscopic level, where some of the more delicate aspects of fluidics (such as surface tension and viscosity) become much more powerful. It is labeled as a 'high-energy' laboratory because it also deals particularly with particle physics and how that branch of science interacts with fluidics. Many of the instruments and much of the equipment in this laboratory is designed to deal with very small areas and volumes, so it is practically the reverse of the high-energy biophysics laboratory in that the majority of the lab is an observation section with very small experimental chambers. Each such laboratory possesses a heavy-duty EPS linkage, two dedicated subprocessors, multiple LCARS terminals and science consoles, several medium and multiple small wall-embedded displays, and a holoprojection system for observing experiments in real-time and three dimensions.

One science officer standing on the bridge of a vessel in combat is not the best individual to run all of your sensor information through. The key to effective sensor sweeps is delegation, especially on larger vessels, which is where the sensor systems laboratories come in. In these rooms, each filled with a dozen consoles, LCARS terminals, science technicians, priority-access ODN uplinks, a reserve power supply, and a large wall-embedded display, up to sixty distinct processes can be run, with sensor feeds coming in from all over the vessel, probes, and even from other vessels. Here, science technicians watch the consoles, adjust for interference, draw conclusions, and especially provide another level of checking to ensure that the computer is not making a mistake. As there are numerous different requests for sensor usage at any given moment, this facility provides a technician and processing power to facilitate those requests, without the need to bother the bridge science officer whenever a visiting astronomer wishes to make observations of the surrounding stars. Any priority access to sensors (such as the Bridge or Engineering) causes the data feed to be split, with the main feed going to the priority access console, and a duplicate being transmitted to a console in a sensor systems lab for additional review. In many respects, this mildly busy room often resembles a 'mission control' facility, with each technician tending to their own tasks for a majority of the time. The number of sensor systems labs varies by vessel size.

All Federation vessels have a vested interest in the study of subspace, be it for communications, propulsion, or a myriad of other reasons. To this effect, the subspace systems laboratory exists to study subspace, the mechanical systems that interact with it, and their effects upon one another. Sets of experimental subspace transmitters and relays are fabricated and tested here, before being put out in the field for further testing. The lab also contains a powerful cartographic sensor suite that, on mobile vessels, passively maps subspace as the vessel travels along, along with fabrication equipment, very precise sensing instruments, and a double-handful of consoles. Of course, subspace systems are not limited to transmitters. They can also include warp engines, metaphasic shields, sensors, and FTL components in computer systems, long-range sensors, and impulse engines. 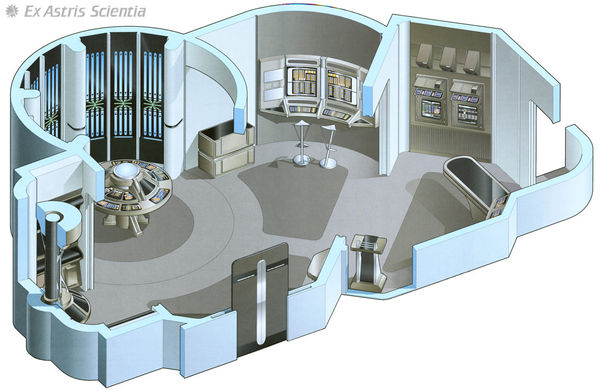 Scattered widely throughout the USS Za, multipurpose laboratories are just that: laboratories designed with no single, specific purpose in mind. As such, they are simultaneously more and less complex than their more specialized cousins. Half of these labs are little more than medium-sized rooms with movable desks, wireless LCARS terminals, and a medium wall-embedded display. The other half are far more adaptable workspaces with modular desks, EPS linkages, and ODN connections for consoles, LCARS terminals, and other instruments. The more 'advanced' versions possess a flexibility unmatched by any other type of lab, but the price paid for that flexibility is the inability to serve as a truly specialized lab. For example, an astrophysicist may use a multipurpose lab to mimic a subspace research lab, but what he can accomplish there would pale in comparison to what he could at his university's fully-stocked subspace laboratory.

There are numerous laboratories aboard the USS Za that are not designated as purely scientific in purpose, but rather are used by science officers in conjunction and collaboration with officers from different departments. They are numerous and varied, and include but are not limited to: Implant Research, Medical Research, Power Systems Research, Psychological Studies, and Technology Assessment.