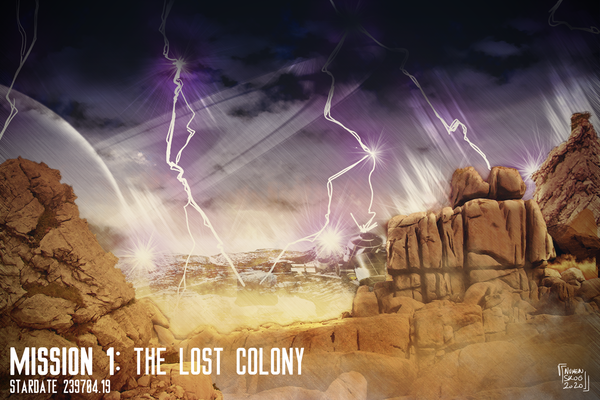 On the USS Thor's maiden voyage, Starfleet ordered the Fleet Captain Aron Kells to investigate a distress call coming from the Ysdyen Nebula. According to the message it was coming from a planet that was lost in Vel Maijan where a colony was founded in 2159 but disappeared in 2164, along with the rest of the solar system. The captain split the crew in three different groups. Group one was to work on research into the colony world. Group two was to prepare for any confrontation they might encounter. Group Three was to prepare for any medical issues they might encounter.[1]

Group one, consisted of Commander Pandorn, Lieutenant Lovar, Doctor Alieth, and Ambassador Turner.[footnote 1] They managed to clean up the distress call that was sent out. It read "*crackling* To the Federation...this is *static* We need assistance. *crackling* Planet becoming uninhabitable...::severe interference:: ...took refuge underground...sky filled with lightning...massive energy surge...*static then silence*." The team came up with the possibility that the colony has undergone some sort of cataclysm. The planet magnetosphere was severely weakened exposing the planet to solar winds and other radiation.[2]

Group three, consisted of Doctor MacKenzie, Ensign Wilkins and Commander Brodie. MacKenzie was concerned about any radiation poisoning that might affect the crew. Brodie pointed out that the colonists might need some psychiatic help. Ensign Wilkins was assigned to prepare a report about the colony to brief anyone on an away team.[4]

After three days of travel the USS Thor came to the Ysdyen Nebula.[5] Captain Kells assigned Doctor McKenzie to lead a team on the surface of the planet, Vel Maijan, and explore the ruins. Commander Teller was assigned to a team to search below the surface since the distress call said the colonists sought refuge underground.[6]

Doctor McKenzie's team, consisting of Ensigns Dar and Wilkins, Lieutenant Quenm, and Major Parker, took a shuttle down to the surface of Val Maljan. The ride was bumpy, but Parker was able to land the craft without any problems.[7] The away team did not pick up any life signs, but MacKenzie did find some petrified wood indicating that something dramatic happened on the surface. Dar discovered a skull of a human female. The signs on the surface wasn't looking good.[8] The team made their way towards one of the buildings hoping to find some answers.[9] The building began to shake due to seismic activity and a ion storm along with a detection of chroniton particles.[10][11] The crew double timed it back to the shuttle to get back to the USS Thor. The ride was again very bumpy and there was a chance they would pass through some of the chroniton particles. With Parker piloting the shuttle, the group manged to make it back to the USS Thor with no problems.[12]

The second team with Teller in charged beamed down to the caverns under group on Vel Maijan.[13][footnote 2][footnote 3] In the tunnels, Greaves heard what he thought were noises. Meanwhile, Lovar discovered the atmosphere contained Beta radiation, something that doesn't naturally occur.[14] Brell found that the levels of carbon dioxide was increasing in the caves.[15] Brell also recognized that the cavern walls were smooth indicating that something or someone carved the cave system.[16][footnote 4] Pandorn picked up traces of aluminum and oxygen.[17] It appeared that something was alive in the caverns. Communications with the USS Thor were down due to basalt being present in the rock.[18] Orh'am, a young Azcou, and Cth'am, an older Azcou, came upon the away team by burrowing a tunnel directly under Pandorn and Greaves. Greaves' EV suit was badly damaged causing oxygen to vent out. His leg was also in bad shape.[19][20] Teller's away team encountered Rick Armiger, the colony's Chief Doctor who shot his phaser at the Azou.[21][22] They were brought back to the colony's underground colony by Rick and Ellen Flynn, the colonies leader. Ellen informed the away team that the distress call was sent out by her grandfather a few weeks ago.[23] Greaves received medical attention by Rick. Lovar speculated that he broke his femur and has possible radiation poisoning.[24] He was treated for radiation sickness, but nothing was broken. He just had a gash on his leg.[25] Ellen erroneously said that the colony was underground for seventy years.[26] Suddenly there was a loud tremor and Pandorn picked up an increase in ion discharge and a surge in chronoton energy. Communication with the That was established. Captain Kells informed the away team that pattern enhancers were available for them at their initial beam in site.[27]

Meanwhile in Main Engineering on the USS Thor, the Engineering Department was monitoring the away teams via a workstation holo representation of the planet.[28] They detected an ion storm just seven miles west of the Vel Maijan and heading east.[29] Sirok was setting up a beacon along with pattern enhancers in an attempt to transport Teller's team off of the surface of Vel Maijan.[30] After the equipment was placed, Sirok detected chronitons starting to formulate on the planet. He proposed to use anti-chronitons to neutralize the chronitons.[31]

On the Bridge, Alieth and Brodie were monitoring the away team's status. Brodie got in touch with MacKenzie but was unable to establish communication with Teller.[32] They agreed with Captain Kells that the team should be pulled out and quarantined.[33] With a boost of the signal Alieth was able to get feedback from the EV suits from Teller's away team discovering that their oxygen was low and that Greaves appeared to be injured.[34]

Captain Kells was informed that there was a total of one hundred and ninety-three colonists in the underground bunker. It would take time to beam them all off the planet, but there was plenty of room to accommodate them on the Thor.[35] Doctor MacKenzie, who was back on the Thor, order her staff to converting one of the cargo bays to accommodate a triage unit for the one hundred and ninety-three colonists and the away team.[36]

In Science Lab Three, Wilkins speculated that the chroniton particles might have been artificial created, possibly by a Romulan cloaking device,[37]

Meanwhile, in the underground colony on Vel Maijan, Greaves noticed that the roof and upper walls looked like they were fractured and had a different mineral composition. It appeared that some acid was used to dig some of the tunnels, but the colonists didn't use acid to dig with.[38]