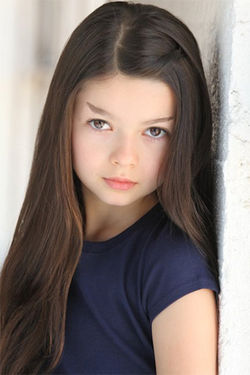 T'iana, a Vulcan, is the only child of Starfleet Officer Varaan and his wife, T'lani. She was conceived when T'lani came to visit Varaan during a period of shore-leave for the USS Paladin. She was born while Varaan was on mission commanding the Vindera, and so he missed being there. He had never met his daughter until he returned to Vulcan before taking command of the USS Atlantis. From 238209.27 until 238304.25, while he was assigned to Vulcan, he was able to live "at home" and so was able to spend those months with his family. After that, he was assigned to the USS Steadfast-A and has been away from Vulcan ever since. He had not seen his wife or daughter in person since he left. Then, in 2392, Varaan's wife (a civilian scientist) was assigned to study the nebulae in the Par'tha Expanse, where Varaan happened to be assigned. T'iana was once again united with her father. When Varaan was reassigned from the USS Atlantis to the USS Apollo-A, T'lani requested a reassignment to the Apollo-A's civilian contingent, and Varaan's family went with him. On stardate 239209.25 T'iana and her mother returned to Vulcan due to a serious illness with T'iana's maternal grandmother. Varaan was coincidentally transferred to the USS Triumphant as Chief Engineer.

T'iana's grandmother eventually passed away, and T'iana and her mother left Vulcan again, this time destined for the USS Darwin-A, which was now her father's assignment. After a journey which saw them pass through Deep Space 6 and hitch a ride on the USS Endeavor, the family reunited on the Darwin on stardate 239301.05.

T'iana is beginning to show an aptitude for mathematics and performance music.