You may be looking for the species or Salak's betrothed 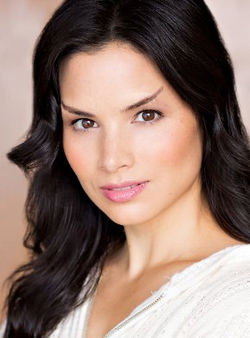 T'lani, the wife of Varaan, is a graduate of the Vulcan Science Academy, and a scientist currently involved in the space sciences (astrophysics, cosmology, astronomy, etc). She worked closely with Varaan's father on the Vulcan Science Council. She is a beautiful woman (even Vulcans can appreciate asthetics), and very intelligent. Their union had been arranged when they were children, but they truly love each other (as close to love as Vulcans get). They share a daughter, T'iana.

In 2392 T'lani was assigned by the VSA to head a team studying the nebulae in the Par'tha Expanse. She took their daughter and relocated to Deep Space 26. At this point, Varaan was assigned to the USS Atlantis, also in the Par'tha Expanse. Varaan was able to reconnect with his family after six years apart, with virtually no contact. Varaan was transferred to the USS Apollo-A, and T'lani used her connection with her father-in-law to be transferred to the Apollo-A's civilian science contingent. The three of them, Varaan, T'lani, and their daughter T'iana, all relocated to the Odyssey class vessel on 239207.13.

This situation did not last long, as the family was divided again on 239209.25. T'lani's mother had fallen ill, and she returned to Vulcan with T'iana, whilst simultaneously Varaan was transferred to the USS Triumphant as Chief Engineer. T'lani and their daughter stayed on Vulcan with her family, until the death of her mother. Once the appropriate funeral rites had been performed, T'lani and T'iana caught a transport to Deep Space 6, where they would ultimately gain passage on the USS Endeavor, which was en route to the USS Darwin-A's position in the Delta Quadrant. The Darwin was now Varaan's assignment, and they would once again be living together as a family. The Darwin was a science vessel, so the VSA easily approved an assignment there for T'lani. The family reunited on stardate 239301.05.