This paper addresses the topic of stem cell use combined with nanotechnology as a possible treatment for spinal injury that would normally be inoperable and remain a lifelong impediment to the patient. Through extensive research and trials, the researcher was able to replace the damaged spinal column using genetronic technology and program the nanites to work in conjunction with the stem cells to stimulate regrowth of previously destroyed myelin sheath as well as using the nanites to prevent mutation of cells which could lead to cancerous growths. The results of the treatment and surgery are detailed in this dissertation.

The use of genetronics to replace the spinal column bone and the use of both stem cells and nanites to encourage regrowth of myelin sheath surrounding the nerves in the spine is a risky endeavor in a single species patient. If not done correctly, it can lead to permanent paralysis or even death. The patient's hybrid physiology led to even greater risk of complications. Until the surgery, the patient had been using nanites to keep herself mobile, programming and injecting herself with the mini-machines. However, her necessarily strenuous activity as a result of her occupation (Starfleet officer) caused degradation to occur faster than the nanites could repair. The nanites themselves began to malfunction and the patient soon found herself unable to keep up with the demands of her worsening injury, thus necessitating an alternative measure to ensure she maintained her mobility. After extensive research and input from both Medical and Engineering professionals, the patient was presented with two treatment options, as outlined below in the methods section of this paper.

For the purposes of this paper, nanites are tiny machines programmed for a specific purpose. In this case, they protect healthy cells and destroy mutated cells to prevent the unhealthy cells from overtaking the body, leading to serious repercussions, such as cancer. While this requires routine check-ups for the remainder of the patient's life, the need for nanite injections will be decreased in frequency. Further, regeneration is the regrowth or repair of an organ damaged by any means.

Research on this specific topic has been minimal given its controversial nature. However, extensive research has been done on both the use of stem cells to regenerate damaged organs and on nanotechnology in the field of medicine. 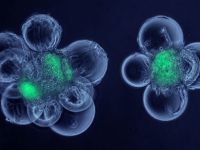 Stem cells replicated in a lab.

The idea of using stem cells for the the purpose of regenerating organs was born in the early 21st century. Scientists studied creatures that were able to regenerate whole body parts in hopes of understanding how such a remarkable feat of biology could be applied to the human body. This research also revealed the amazing ability of the human liver to regenerate itself when a segment of it was removed. Though it never resumes its original shape, it regains its original mass [1]

Stem cells were explored for the treatment of multiple sclerosis, an autoimmune condition in which the immune system incorrectly saw the myelin sheath surrounding nerve cells as foreign and began attacking this protective coating, resulting in damage to the nerve cells and leading to slowing of messages to and from the brain. The use of mesenchymal stem cells has been shown to repair this damage as well as repairing the immune system, preventing further attacks. These cells are found in several places in the humanoid body, including in bone marrow, skin, and fat tissue and they produce cells that help other stem cells to function correctly. The theory behind the application of this method is that a scientist expands the cells in a laboratory and injects them into the space surrounding the spinal cord (intrathecal) with an end goal of inhibiting immune response and augmenting tissue repair [2].

Nanotechnology has also found applications in medicine since the early 21st century when mankind first imagined the use of nano (mini) robots to repair the body at a cellular level. One of the most progressive uses of the technology was engineered nanoparticles designed to deliver a variety of elements such as heat and drugs to specific cells, leading to direct treatment of these cells in hopes of reducing damage to healthy cells in the body and allowing for earlier detection of disease or mutations in cells. [3]

Another important aspect of the field, nano-gel, injected as a liquid into the spinal column, supports stem cells in that it not only prevents scar tissue from forming as an injury site heals, it also encourages the stem cells to create new cells that produce myelin, the material that surrounds the nerves of the spinal cord and prevents them from being damaged. The gel is often used in combination with stem cell therapies to heal spinal cord injuries, including severed nerve fibers and supports the growth of axioms both up into the brain and down to the legs, bridging the connection. Patients who were previously paralyzed are able to regain some, if not all of their mobility. [4]

Innovations in this field are fairly recent. The first functioning genetronic replicator was designed and constructed by Doctor Toby Russel in the mid-24th century. Dr. Russel's theory was that the device could scan a person's DNA and damaged organs, then using this information to replicate a new healthy organ. The first recipient to survive the use of this technology was a Klingon male, Worf, in 2368. He was struck by a falling container and, as a result, was partially paralyzed when the container broke his spine. In the case of the Klingon male, Dr. Russel proposed the replication of a new spinal column to give the male full mobility back. The patient nearly died during the operation, but survived due to redundancies in his biological systems. The process was later refined by Doctor Simon Tarses when it was used in combination with nanotechnology to repair the damaged portions of a Bajoran female's spine when it was severed by Taran'atar's attack [5]

The patient suffered broken lower lumbar vertabrae and nerve damage as a result of her fall. Though doctors
were able to reconstruct most of her damaged spinal column, the fragile nature of the vertabrae combined with the severe nerve damage offered no hope that the patient would be able to regain her mobility. This was only achieved by the introduction of specifically-programmed nanites which were able to reverse the nerve damage and strengthen the vertabrae. However, the nature of the injury resulted quicker-than-usual degradation of nerve fibers and already-weak bone. Despite daily injections of nanites with the intention of slowing the damage, all attempts have proven to do so only temporarily. It was estimated that without drastic action, the patient would lose mobility completely by age 30.

As stated previously, factors that could impact the result of the procedures proposed in the methods section include the patient's hybrid physiology, age, gender, diet and exercise routines, and the unique nature of the patient's injuries. Another factor that could have a radical effect is the specific programming of the nanites currently in the patient's body. As with multiple sclerosis, there is concern that the nanites' attempts to repair damage to the nerve fibers is moot in that the myelin sheath surrounding these fibers is degrading to a point that messages to and from the brain are being slowed, resulting in decreased mobility.

The patient, an otherwise healthy Al-Leyan/Human female in her late 20s, choose to participate in this study due to her rapidly decreasing mobility and the limited number of options available to her due to the nature of her injury. Her career as a Starfleet officer requires that she be in good physical condition and overall good health. She eats a balanced diet and engages in daily exercise ranging from weight-lifting to martial arts sparring sessions. The patient has no family history of cancer or otherwise debilitating illnesses. However, the patient had expressed a recently discovered allergy to Hyronalyn medications used to treat radiation poisoning, contact with the medication resulting in seizures. The patient was prescribed regular doses of Pregabalin to counter the seizures. Further, the patient had an O- blood type, which could have presented complications if she received anything other than O+ or O- blood.

Scans were taken of the patient's spinal column prior to treatment to ascertain the extent of the damage and to determine if the proposed treatment options made sense for the patient's particular injury. This data revealed that, despite the risks, the patient was a good candidate for the procedure. The patient elected to undergo spinal replacement surgery via the use of a genetronic replicator, which would create a new spinal column using the patient's DNA profile. Developed initially by Dr. Russel in 2368, this technology would eliminate the weak bone variable while the nanites would continue the process of repairing damaged nerve fibers. The mesenchymal stem cells would then, with the aid of the nanites and the nano-gel injected together into the space surrounding the spinal column, begin the process of repairing and creating the destroyed myelin sheath surrounding the nerve fibers. Repair of the myelin sheath would slow the damage to the nerve fibers exponentially, to a minute enough degree that the programmed nanites would be able to keep pace with the normal degradation with quarterly injections of new nanites.

During surgery, the patient received an anesthetic to render her unconscious. Her biosigns were closely monitored. It was necessary to cut through some of the nerve fibers in order to remove the original spine, so the patient was placed on temporary life support. Once the new spinal column had been replicated, it was placed carefully into position and fused at both the upper and lower vertabrae. The patient was then closed up and injected with nanites and stem cells into the space surrounding the spinal column to begin the regeneration process.

Lael's spine after the replacement surgery.

Prior to her surgery, the patient experienced significant difficulties with mobility that, at times, impeded her ability to perform her duties. The patient also experienced chronic pain at the site of the injury and stiffening of her limbs. The continued degradation of the nanites used to keep the patient mobile meant that had she not attempted the procedure, she would have experienced near complete paralysis and would likely have been confined to a hoverchair until an alternate solution could be found. Post-surgery, the patient reports a drastic decrease in pain as well as increased mobility. The use of physical therapy techniques has helped the patient to regain much of her previous mobility and she continues to make excellent progress. The patient has reported only mild side effects from the procedure such as moderate at the surgical site, fatigue, and headaches, none of which are unexpected. The patient attends twice month appointments to monitor healing progress via deep scans and evaluate for potential signs of Failed Back Surgery Syndrome (FBSS) [6], in which the patient experiences unusual chronic pain post-surgery. Despite these risks, the patient's primary physician anticipates that she will make a full recovery.