Ensign Motor Vihn is currently serving as a Medical Officer aboard the USS Juneau.

Motor and Voram's father. Jero is a gifted exobotanist and dabbler in all things engineering. While Motor has historically had a very close relationship with their father, things have become more distant since their Joining (and further still since joining Starfleet instead of a Trill organization).

Motor and Voram's mother. Vazen is a renowned geneticist and exobiologist, and was similarly close to her children as Jero. The rift post-Koining is particularly noticeable between Motor and Vazen, and the two haven't spoken since their decision to join Starfleet.

Motor's twin. Growing up, the two were virtually always together and relied on each other in almost everything. Their identity as siblings was a large part of how they related to each other, and their similar experiences informed that greatly. Unfortunately, when Motor was joined, many of those things were no longer the case. In a sense, Motor became far older and more experienced than Voram. Their personality fundamentally shifted, becoming more relaxed and less focused. This tension is likely a large part of why Motor left Trill -- they disliked the conflict they held with someone who had once been their closest friend.

The Aurelian that served as Motor's first real patient in Starfleet. Preventing assimilation is hardly relaxing work, but it does serve as one memorable introduction. They don't know Dekas well since their first meeting was somewhat colored by the emergency and the Aurelian being heavily drugged, but Dekas seems a friendly sort.

A human nurse that helped Motor save Dekas (he'd argue she did most of the work by keeping him alive and coming up with the idea for restructuring the medicine). He's a little worried he offended her somehow during that initial interaction due to some behavior he can't quite place, but otherwise, Pelley seems like good company.

A half-Vulcan engineering officer and Motor's fellow Starfleet graduate. They don't know Vel well, but she's relaxed and sure of herself in a way that Motor finds almost comforting. He hopes they can be friends, if only from the standpoint of arriving on the ship at roughly the same time.

A Vulcan Engineer who's had perhaps the most notable interaction with Motor, alongside Dekas. The two had a good conversation over lunch that unfortunately ended in Motor seemingly somehow offending Sera after she attempted to broach a fairly sensitive topic. Motor finds her company enjoyable and interesting (in what sense or to what extent, they are not sure themself), but is somewhat worried that they burned that bridge. Knowing they'd gotten at least a little flirty by the end of the conversation, Motor is relatively sure that is where they overstepped.

Motor's mannerisms tend to shift with the severity of the situation. When things aren't serious, neither are they -- when they are dire, so are they. Their nature as a Joined Trill can sometimes make them seem unapproachable and particularly alien by nature of having an almost ageless perspective on things, but they are generally quite friendly and laid back, much to their sister’s chagrin. 'Flirtatious' isn't really the right word, as it implies intent. They are simply very outgoing and tend to be at ease around people very quickly. This further comes through in that they don't ever really hold grudges. All but the most severe slights are forgiven and forgotten unprompted, and even more severe damage can likely be repaired.

The dark side to this positivity and friendliness is that it is often used as a mask to hide deep-seated insecurity. Motor doesn't allow themself to feel or express negative emotions and will invariably relate any social failings to being their fault. They are still relatively newly joined and finding their place in the world as such is difficult, particularly when their family doesn't seem to care for the ways it's changed them. The separation from Voram, as they are in a sense no longer the same age, is just one aspect of their new life they find deeply uncomfortable. Beyond that, they have centuries of worries, flaws, and mistakes now resting in their brain and none of the knowledge on how to handle them.

As leftovers from their past lives, Motor has a particular penchant for creating art, and much prefers home-cooked food to its replicated variant. They have very little time for either, but that's where most of their free time is spent. They enjoy learning about other cultures and various reading, but have a tendency to get bored if they rest on their laurels for too long. Similarly, they dislike when people have an overly serious outlook on life (save Vulcans, where it's part of their charm). Preserving life is their utmost priority as a doctor and anything contrary to that is not an option they will likely ever consider.

The Roehls, a family of unjoined Trill scientists, had two children fairly early in their lives in the twins Motor and Voram. The two were inseparable, despite their aspirations for very different things -- Voram wanted to follow in the footsteps of her parents, while Motor wanted to be Joined. Despite some trepidation from their parents on both fronts, they were supportive in each endeavor, but neither would have likely succeeded without their sibling's help.

Voram was well on her way to being an accomplished researcher in the field of Genetics, while Motor cut their teeth on the medical sciences with a more practical leaning (another thing that their parents hesitated on, but supported them in anyway). They were less keen on academics and more on helping people. Motor graduated medical school with a doctorate in both pediatric and emergency medicine at 26 years old.

It took some effort, but Motor managed to be one of the lucky trill selected for Joining through the initiative and drive they showed in the medical field pursuing more than one degree. Vihn, a symbiont known previously as an artist, architect, and cook, had lost their host. And so, Motor Roehl became Motor Vihn.

As with all joined Trill, something of a rift formed between them and their family. Motor was still wholly Motor, but now also wholly Vihn. This rift grew further when Motor decided to leave Trill altogether, both to apply their medical training abroad and to give the Symbiont a new experience in their constant striving for higher learning. This eventually led them to Starfleet, where they found (and still find) themself completely out of their element. Motor graduated Starfleet academy with a degree in Exobiology.

Not to be outdone, Voram joined the Academy at roughly the same time Motor did. She graduated with degrees in Chemistry and her preferred field, Genetics.

They are the sixth host of the Vihn symbiote, preceded by (in chronological order of most recent to least) Yuzra (an artist), Jiariss (an architect), Caanin (a chef), Riaseel (a politician), and Rolau (a Trill historian). This is a double-edged sword: Vihn truly has no experience in the sciences, so all of this is so incredibly new to them, but, unlike many Trill, they can't rely on decades of Starfleet experience. They might as well be any other Ensign, as far as their combat or field experience is concerned. 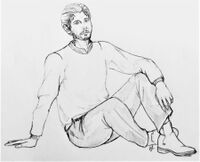