Her quiet, sometimes reserved demeanor results from strict Vulcan training and an inherently gentle somewhat shy disposition. However, she has a quick sense of humor and deep loyalty to her friends. She has great compassion for her patients both human and animal. Beyond establishing empathy with her patients, both animal and human, she is extremely reluctant to use or reveal her Betazed tendencies, always fearing that if forced to exercise them too often, she might lose control and be overcome by the cacophony of thoughts around her. Unlike most Betazoids she has a deep affinity and love for animals,particularly dogs, whose simple emotions she finds soothing and endearing.

Johanna Deirdre MacLaren was born in Aberfoyle, Scotland, Terra. Both of her parents were born there and returned to Aberfoyle after retiring from long and distinguished careers in Terran Diplomatic Corps.

Johanna was raised there until the age of 14 when she was sent to Vulcan for education. She has a close relationship with her twin brothers, both of whom serve in Star Fleet. Gavin is a diplomat, and Colin is a medical instructor at the Academy. She went to school in Aberfoyle until sent to Vulcan to learn to control telepathy and empathy. Johanna had inherited significant telepathic ability from her Noble House Betazoid grandparents but had no ability to filter out any feelings or thoughts that assaulted her. As a result, she shunned human companionship and found groups unbearable during childhood. Trainers on Vulcan determined that her condition was complicated by the fact that her human Celtic heritage made her particularly susceptible to occasional precognition, a condition usually uncontrollable in humans. She was sent to Vulcan where she was finally able to learn to block out impressions and thoughts of others.

Early in her life, she had been drawn into the world of veterinary medicine since animal minds were simpler and less intrusive than humans. After her training on Vulcan, she took up humanoid medicine but did additional training in veterinary medicine. While she had initially planned to stay and practice in Scotland on Terra, her time on Vulcan excited an interest in Star Fleet to which she applied after graduation from secondary education on Vulcan. She was accepted into Starfleet Academy where she graduated Starfleet medical with a specialty in Inter-species Medicine with a minor in veterinary medicine. 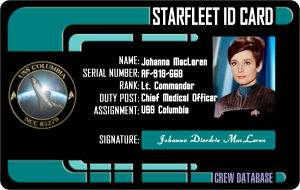