Lieutenant Helen Beal is currently a Counselor aboard the USS Eagle.

Helen Beal was born in Normany, France, as the end result of her artist parents' whirlwind and utterly utopian romance. There she lived until the age of twelve, when the three moved to Los Angeles, California. Despite the change, Helen experienced a typical and uneventful childhood. In fact, it was likely easier than most, as Helen was exceptionally popular among her classmates and a favorite of her teachers. Of course, this was partially due to her French charm, but much credit should be given to Helen's own intelligence, wit, attractiveness, and foremost to her artistic talents. She was a gifted child who couldn't seem to avoid standing out.

By high school, Helen was slightly more aware of her talents and decidedly more French about them, in the unflattering stereotypical way. She became the socially elected It Girl, with a loyal clique following. Outsiders saw her as a snob, which she was for a time. It grew tiresome for her quickly, but without means to deflect the attention, Helen took deeper solace in her art. Among her fellow young artists, Helen found friends who were more interested in life's complexities and less interested in Homecoming. One such artist was David Lithgow. Love came quickly.

David, a seductive and mysterious figure, rapidly accumulated all of Helen's attention. She lived for him. Everything else took second place. A few days before their graduation, the two eloped, surprisingly to the delight of both families. For Helen's parents, their daughter was following their love-blazed path, and David's father now had a son who would be forced to give up his "silly art habit" and provide for his wife in the family business. David happily does this, but the joy fades as he begins to resent abandoning his artistic aspirations. 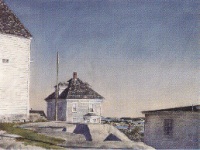 Helen, free to continue her artistic study, was taken as an apprentice by Samuel Nathans, a colleague of her father. Although twice her age and married, Samuel fell in love (or lust) with Helen. Their year together was marked by several tentative advances on his part, which Helen--still very naive about the darker paths of love--laughed off as jokes, but when Samuel attempted to force himself upon her in their studio, she fled in horror. Their professional relationship was immediately severed. Confused, and ashamed by her own foolishness, she told no one what had taken place. For several months, she found it difficult to work. 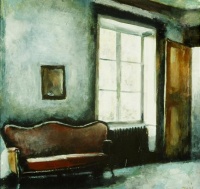 This lull in Helen's career ultimately brought fresh life to her marriage. They attempted to begin a family, but found it difficult to conceive. The pain of two two miscarriages thrust Helen fully into adulthood, which she found to be a dark and disappointing shadow of what she had expected. It also shattered her own golden self-image. She was not as perfect as she had been led to believe.

In dire need of a change, Helen returned to school to pursue a degree in psychology. David's father died, leaving the entirety of his restaurant empire to his emotionally broken son. In search of comfort, he entered into an affair with an employee: Anna Greco. It did not remain secret for long. Devastated, Helen left David and returned to the home of her parents. Six months of arguments, short reconciliations, and fights, as well as a third miscarriage, passed before Helen finally filed for divorce. She ended all contact with him and returned to her maiden name.

As soon as she obtained her psychology license, Helen applied to Starfleet Academy, determined to get as far away as possible from David and the remnants of her shattered youth. Buried in her work, life proceeded uneventfully for a while, until her nerves reached their breaking point. Helen succumbed to a nervous breakdown, forcing her to take a leave of absence--the reason, however, is mostly absent from her personal record. At home, her parents tried to get the best care possible for their daughter, though accomplishing little more than leading Helen into an overly medicated haze. After a year, a frustrated Helen ended all treatment and took her recovery into her own hands. She returned to Starfleet, completing her courses and training with impressive speed and finding great healing in hard work. She now considers herself recovered, though she still has anxious moments from time to time.