The David Lithgow of today stands a great distance away from that of his youth. As a young man, David was a brooding, free-spirited rogue and a loner by choice. In another century, he might have emulated James Dean. Teachers did not trust him, while most of his peers adored him. Suffice to say, he was especially popular among the girls. However, as these stories often go, this hard outer shell encased a sensitive teen with a troubled home life. His mother had left during his childhood and his father compensated with a never-ending string of short-term girlfriends. Fortunately, David was a gifted student and school was a safehaven. More importantly, he was an astoundingly talented artist, particularly marked by an aggressive use of color. 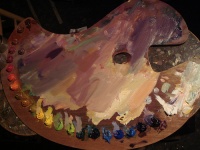 In high school, David met his match: Helen Beal, an equally gifted artist, with whom he fell quite passionately in love, and she with him. Being the most popular girl in the school in her own right, this sealed David's fate as the big man on campus, according to his peers, and a bad influence, according to his teachers. He and Helen were utterly inseparable, even frequently forgoing their art for the sake of time together. A few days before their graduation, they eloped, which seemed unquestionably right at the time. However, this forced David into his wealthy father's restaurant business. Soon, it also forced him to abandon his artistic aspirations. It did not take very long for David to grow resentful, as Helen remained free to hone her own skills. 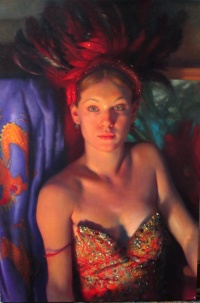 Red and Blue, Oil on Canvas

Believing that a child would heal his injured spirit, David pressured Helen to get pregnant, but every attempt failed. Miscarriages drove them further apart. The sudden death of David's father was the breaking point. He sought comfort in an affair with a co-worker, Anna Greco, a plain, completely uninteresting waitress. Little work was required for Helen to discover this. The marriage was over and Helen began proceedings for a divorce. David, realizing the only thing he had ever truly cared about was on the line, made several earnest attempts to win back his wife. But when Anna Greco claimed to be pregnant, he had little choice but to change his focus. By the time Anna's claim proved to be nothing more than a lie to control him, the sands of time had run out on his marriage.

By this point, David's downward spiral was nearing the bottom. Helen severed all contact. He left the USA and moved north to Canada, where he remained for more than a year, living a simple, contemplative life. This, however, did very little to heal his wounds. Ultimately, he had no choice but to return to California and his business.

Now, David Lithgow's exterior masks a profound emptiness. He goes through life like one already dead, not even bothering for the slightest fulfillment. His restaurants are the finest and most popular on the West Coast, and he lives a comfortable, if lonely, life. In some ways, he is a more open and friendly individual than in his youth, and not so moody. Most regard him as a highly eligible bachelor. The memory of his former wife haunts him almost as much as the havoc he wreaked upon her.

David was recently outed as the father of Wystin Vinna, a child he had with Wystin Nua, a Bajoran woman who was undergoing the Rite of Separation at the time. Despite David's preference for a solitary existence, it can't be said that he is completely celibate.