Ensign Avarin is currently serving as an Engineering Officer aboard the USS Blackwell, Andaris Task Force.

Avarin is slender and moves with a sort of economical grace that speaks of early training in the Vulcan martial arts. As a touch-telepath, she refrains from casual contact and sits in ways that some of her quad-mates back at the Academy claimed were decidedly 'un-Vulcan'. Her hair is black and cut in an asymmetrical haircut (right side extends to below the jaw while the left side is shorter and tucked behind her ear). Her black eyes have an epicanthic fold and seem to dominate her face. Her hands are slender and well-formed though slightly cool to the touch since her Vulcan physiology finds the temperature aboard Federation vessels and on Federation stations to be somewhat chill. When off-duty, Avarin favors the Vulcan mode of dress. While not body shy, she dresses for comfort and warmth. She wears monochromatic, long-sleeved tops and pants paired with long-sleeved robes that fall to mid-thigh. The robes tend to show an artistic flair in their design and subtle shading. The sleeves of her tops are often fitted to cover part of the hand, thus providing a bit of additional warmth without restricting or inhibiting movement. 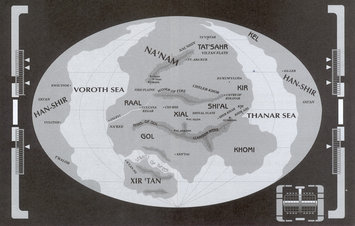 Avarin was born in Shi'let'theiri, a predominantly agrarian settlement located in the Vesh'V'ree'lat Valley, near the entrance to the T'Ralor Preserve, on the Han-Shir continent. The preserve is a vast wilderness area containing over 100 nearly extinct species of flora and fauna. Avarin's mother, T'Reyn is a biologist, specializing in botany, who works in the preserve. Her father, Senok, is an endangered species biologist who is currently working in the preserve as well.

As a young child, Avarin was taught the Pleenok in the local school where her teachers noted her aptitude for mathematics and interest in technology and steered her studies accordingly. Her parents made sure to teach Avarin the Vulcan Lute and an appreciation for the artistic heritage that predated Surak. While Avarin embraced the discipline of logic, detachment from emotion proved difficult for her to master. She found that she needed time alone as much as she needed time with others. She would often take her lute and walk into the preserve, to practice in the undisturbed peace of a natural setting, and to vent the feelings she could not otherwise express.

At the age of seven, Avarin was telepathically mated to Sevel; each year, the two families would meet, observing the custom of Ten'Chara, until it became clear that Sevel and Avarin were inseparable. Together, Sevel and Avarin decided the path they would follow. They enrolled at the Shirkar Academy and spent the next four years studying, Sevel in Science, Avarin in Applied Mathematics. In their last year of studies, the couple informed their families that they had enlisted in Starfleet Academy. This was easily accepted as it had long since been clear to both sides that the couple had no interest in working at the preserve. At their graduation, Sevel presented Avarin with a violin, in anticipation of their life among the stars, and Avarin presented Sevel with a cello. The day after graduation, the shuttle carrying Sevel and Avarin back to Shi'let'theiri crashed. Sevel was killed instantly; Avarin felt his death through their telepathic bond. After a period of reflection and withdrawal from society, Avarin elected to continue on. She enrolled at Starfleet Academy the same year.