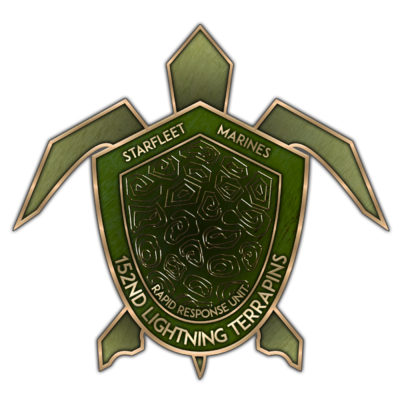 To serve as a unique resource to the Captain and Chief of Security of their assigned ship by providing a cohesive combat unit composed of a diverse set of subject-matter experts capable of carrying out missions under adverse conditions.

Rapid Response Units are designed to be integrated into their host ship’s crew to a larger degree than other standard Marine units. Members are trained in a wide variety of specialties that offer combat potential but can also be used by various departments during less combat intense situations.

The Lightning Terrapins (Formally the 152nd Rapid Response Detachment, 3rd Special Services Battalion) has been assigned to the USS Juneau currently patrolling the Aavaro Wilds. The 152nd is currently composed of twelve Marines that have been highly integrated into the wider ship’s crew.

The purpose of the Rapid Response teams are to provide a wide array of combat skills that aren’t necessarily found in the ship’s crew at large. While there is no specific list of skills required for the teams, there are some that are common to the point of being universal. Armorers are found in nearly every team, with the responsibility of maintaining the unit’s arms and armor. Orbital Mechanics are also fairly common, using their training to assist in planning assaults or defenses of ships in orbit, and usually serves as the team’s pilot and navigator. The third near universal skill set is that of the combat medic. This roll can be rolled into other roles as makes sense and often, if the team has a Search and Rescue trained marine, they often double as the team’s medic.

To make better use of the team’s unique skills, the members are often integrated into the various mainline departments during non combat operations. While all of the members can provide additional manpower for the ship’s security department, they also can be further divided out based on their more specific skill set. Combat Engineer can be embedded with the ships engineering department, Cyber Warfare with Operations, and medics with the ship’s sickbay. The overall goal of the rapid response teams is to be as useful as possible to the ship they’re assigned to.

Listed below are common specialties found amongst the teams. This list is not exhaustive and the teams are always looking for new and unique ways to assist their crews.