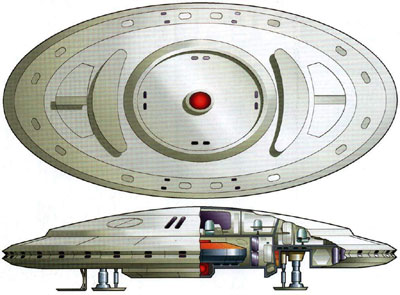 The USS Kumari is the captain's yacht that has been assigned to the USS Columbia under the command of Theo Whittaker. She was named for the Andorian starship that was commanded by the Andorian Commander Shran in the mid 22nd century. The yacht is docked to the underside of the saucer setion of the Columbia and it is similar in design to the captain's yachts that are components of galaxy class starships.

The Kumari is much larger than a shuttlecraft, the Kumari is mounted on the underside of the Columbia's saucer section where it remains docked during normal flight operations. Access to the Kumari is provided through dorsal entry hatch affixed to a docking collar on the upper half of the craft. It is essentially divided into two decks, with the bottom deck housing a toroidal driver coil-based impulse propulsion system, two landing legs for planetary landings, a series of aerodyne flight motors for atmospheric flight as well as fuel and maintenance access to various subsystems.

When in use, the Kumari is manned by a normal flight crew of two and one service representative to assist diplomatic guests, the upper deck houses a flight deck, two modest staterooms, flight crew bunks, and a galley. The Kumari is specially designed so that it can be launched from its parent ships at speeds as high as Warp 7. A deflector system and onboard sensor pallets make the craft suitable for short-range travel. Used normally to transport dignitaries to and from a planet's surface when normal transporter use is not possible, the Yacht is capable of atmospheric flight and planetary landing. Entry/egress platforms on both ends of the craft allow the crew to easily enter and exit the craft.