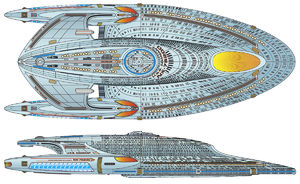 The USS Aquitania is an Adamant-class hospital starship. Originally commissioned as the USS Formidable, part of the ambitious "Warp 10" project, the Aquitania and her sister ships were quickly relegated to other duties after the program's failure. The Formidable was renamed Embassy for a yearlong tour of duty as a diplomatic vessel before ending with the name Aquitania and a quick refit as a hospital ship in 2386. Since 2388, Hayden Reynolds has served as the commanding officer of the Aquitania.