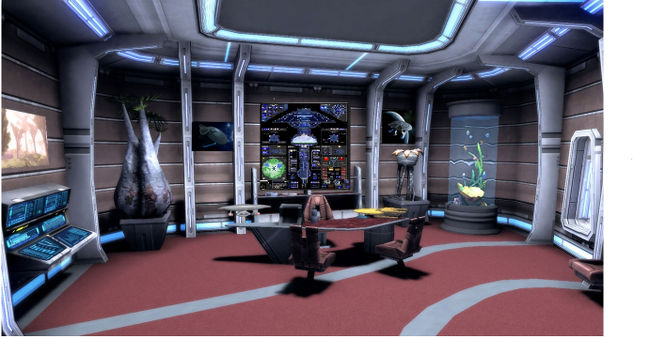 Office of the First Officer Theo Whittaker, the walls have a few picture of the USS Columbia on them, the first Star Ship that Theo served on and where he later became the Chief Engineer. There is also a deck top Model of the USS Columbia that was a gift from Baylen Anders. Behind the desk is a large Station Master Display, where Theo can track the progress of different project being up across the station to include that of the ship in the Dry Dock. This display can also be used as a video monitor as well, looping into the different briefing rooms or Station departments. Videos of the daily press conferences can be played on the screen along with transmission from other ship, stations or planets.

The Plants in the room have been passed along from First Officer to First Officer, they are a rare collection of trees, flowers and shrubs from across this area of space. The fat tree in the corner is almost 100 years old and once belonged to a Romulan Ambassador, before it was given to the Federation. It found its way to Star Base 118 Operations, and there it remains.

The fish tank was added by Fleet Captain Kali Nicholotti then a Lt. Commander and Commander, She wanted to lighten the hard corners of the room and add a softness to it and something to help relax to after a stressful day. Each First Officer brings something to office that they leave behind adding to history of the room.

A Model of the USS Columbia, a Gift from Baylen Anders, to Theo when he was promoted to First Officer.
Retrieved from "https://wiki.starbase118.net/wiki/index.php?title=Star_Base_118_First_Officers_office&oldid=251605"
Categories: