Rafael "Felo" Maria Lozano Vega is currently a Counselor on the USS Eagle. He is a good natured, down-to-earth fellow, but a little too good at his job to maintain an actual social life. He deals exclusively with the most serious of cases. If you are in his office, there is a good chance you are about to be declared unfit for duty.

If you were to ask Rafael Lozano about his life before entering Starfleet, you would get the simplest of answers. "I was born in Baracoa, studied in California, and had a private practice for several years beforehand." 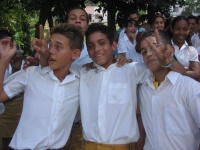 The Lozano Boys (Rafael on Right)

He was born to Carlos Lozano Rivera and Maria Vega de Soto, possibly the wealthiest couple in the city of Baracoa. Old money. Very old. And of Castilian origin. The Lozano boys, three in all, were a lively, mischievous, athletic, well-educated brood, and intelligent to boot. When the time came, they had their pick of any university. But only Rafael, being the youngest, was "given permission" to pick a career beyond the limits of their city. He chose the University of Pennsylvania, in the United States, and his college life was typical. Plenty of partying the first few years, followed by an abrupt onset of maturity. For Rafael, it hit a little harder, as his father died during his senior year. After finishing school, he returned to Cuba for a year, and then it was back to America for medical school at Harvard, his residency, etc... By the end, this new country was his home, and so he elected to set up a private psychiatry practice. 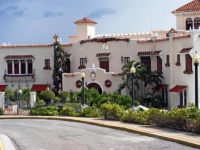 After the death of his mother, his brothers jointly took residence in the family estate. Rafael was expected to return to Cuba and join them, but chose to remain in the United States. This remains a point of contention, putting it very, very mildly. In fact, Rafael is no longer spoken to, something he rarely admits to others, and considers as his greatest shame.

The next decade was spent dutifully on his career and he became renown in the field. As work increased, plans to start a family slowed and then came to a complete halt. The eligible socialite bachelor had been transformed into a man who could think of work as his only mistress.

And what led to Starfleet? He was recruited. With counseling being one of the least sought focuses in the Academy, recruiters have been forced to look to the outside. Seeing the opportunity as the next logical choice, Rafael accepted with no hesitation. He was trained briefly at the Academy and was assigned to the USS Eagle immediately upon graduation.

Given the time to indulge in a life outside of work, he would be a highly desirable friend: loyal, selfless, and drama-phobic. He was once known to be a blast at parties. And even though he might be considered devastatingly handsome by many, it's almost as if he has no idea. Noble and virtuous, Rafael is a rare sort of person. Maybe one day he'll realize it.
Of course, there are negative traits as well, mostly centered around his inability to maintain a social life. He prefers not to get too close to people, because he cannot give friendships the time they deserve. The same goes for romantic relationships, doubly so. All work an no play has made him slightly moodier than he would like, as well as fatigued. And lately he's been wondering if the stress of work might send him to an early grave.