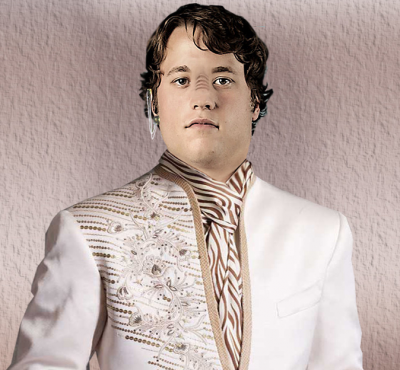 Doctor Kolar Ren is a civilian currently stationed on the USS Tiger-A.

Ren was born and raised on Bajor. He comes from a very devoutly spiritual family. His Father served as a Prylar until his retirement, while his mother was a spiritual counselor. His parents expected Ren and his twin sister Rai to follow in their footsteps and serve the Prophets. However, the siblings had other plans.

When they chose to attend Starfleet Academy their parents were disappointed, but remained supportive. As he was leaving for the Academy his father predicted “Someday you will return to your roots my son”. This prophecy of sorts has been in the back of Ren's mind ever since.

During his days in the Academy Ren was an average student. Admittedly he spent too much of his time socializing and pursuing his own passions of art and writing. One thing that he did discover about himself over time was he had a keen ability to listen to other people and help them deal with the stresses and problems they encountered.

When it came time to choose a major for his studies, Psychology was the obvious choice. Unlike with his core courses, once he began his study of Psychology Ren became a much more disciplined student. Although he still made time for his friends, he found himself more focused than ever. He completed his Psychology training with consistently high marks.

At the end of his four years in the Academy, Ren was offered an opportunity to continue his education. The timing of this was perfect, as Ren had begun to question his decision to join Starfleet. His doubt had little to do with Starfleet itself, and much more to do with his own role within the organization. After receiving permission from Starfleet Command to delay his enlistment, Steven enrolled in a doctorate degree program in Social Psychology. This three year accelerated program focused on a combination of sociological and psychological theories and practices which were designed to assist in analyzing complex cross-cultural, group, and individual dynamics in a much broader context then either discipline could accomplish individually. In addition to regular class work Ren was required to serve a one year clinical fellowship at St Mary’s Medical Center and Research Facility where he performed multiple clinical studies and therapy sessions under the direction and mentoring of one of the foremost experts in Social Psychology; Dr. Allison Tempest.

Upon completing the Doctorate program Ren contacted Starfleet Command per their previous agreement. Much to his surprise once Command learned of his advanced training they offered him a unique opportunity to serve as a Civilian Consultant/Counselor on board the USS Tiger-A which was currently tasked with exploring the Ithassa Region. Due to the complexity of this region from cultural, political and sociological standpoints this opportunity was perfect for Dr. Kolar to put his training into practice.