Lieutenant Jg Karra Telana, a Orion female is currently the Helm Officer aboard the USS Eagle. 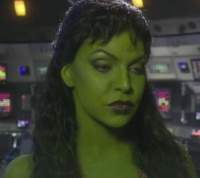 238407.19: Graduated from Starfleet Academy and Promoted to Ensign.

238611.29: Promoted to Lieutenant Jg and assigned as Helm Officer on USS Eagle

Karra was born on Orion in 2365. She was abandoned at birth by her parents and sold into the syndicate. She was raised by an elderly man who was once a trader with the syndicate. Ever since she could speak, he'd been the only person she'd ever had. The only person she could trust, and she loved him. He had always treated her like a daughter, and they were best friends too.

She was sheltered from the evils of slavery by him. She learned how to be an Orion woman from many of her father's friends because she'd never known who her real mother was. She held a strong hatred within her for her parents for abandoning her, and never had a desire to meet them and was sure if she did, she would have nothing to say. She'd been receiving counseling on the matter since she was onld enough to formulate any real opinion on there absence from her life.

In her youth, she attended school and soon had to learn to be aggressive and at times animal like as the women of her race were. As she grew into adolescence, boys began to notice her a great deal more than any other girl. She was very beautiful and very developed. She was also intelligent, a quality most didn't consider in her gender to be the most important thing, but her father did. Her motivation in school soon started dwindling, as she began to pay more attention to having fun than doing work. Her father, however, found this compleately uacceptable. He was determined to make Karra shine, so he set very stricked rules.

Karra's relationship suffered with her father. She felt that he was holding her back from hanging out with friends and enjoying her youth. She would one day come to thank him as she was accepted into Starfleet Academy with high grades and recommendations.

Karra had a very difficult time at the academy at first. It was hard for her to conform to the lifestyles of the people around her. Humans and others where very different from her, and she got so much attention from boys at the academy, she didn't know how to respond to it all. She came out of her shell eventually and became very popular. Her grades again began to slip. But, this time her father wasn't there to kick her back into shape.

There were very kind and caring professors at the academy understood what she was going through. They pushed her and were very tough on her. Eventually she got the point, and was able to do well enough to graduate at the bottom of her class

She was always prone to violent outbreaks, most of the time to do with the way people treated her, or even mean things people would say. It was clear that she had both anger and abandonment issues. She would often refuse to stay in a relationship with someone, for fear they would end up leaving her in the end.

When Karra graduated, she was assigned as a shuttle pilot on the USS Reden. Here, she served for 2 years.

After a while, she was promoted to Lieutenant Jg and Assigned to the USS Eagle as a helm officer.

On top of her being an Orion female with a relative gift of irresistible pheromones, she is also very fond of sexuality. She loves to flirt and play and to be with other people. Some might call this a weakness, others a great strength.

Karra dislikes being lied to and bothered. She has a bad temper at times and would rather be around people whom she has alot in common with....or men.