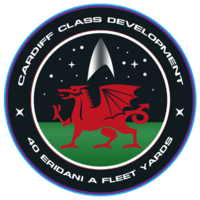 The Cardiff class is a joint product of the Starfleet Corps of Engineers and the Vulcan Science Academy. It employs a Vulcan-style annular warp drive and two massive sensor pods, similar to those aboard Oracle class starships, that occupy the space taken by a traditional Federation starship's warp nacelles.

Invicta is part of an initial launch order of four commissioned starships of the class. The commissioning is part of the Federation’s commitment for Starfleet, in the final decade of the twenty-fourth century, to turn its eye most seriously to the joyful goal of seeking out new life and new civilizations -- and to thoughtfully avoid technologies and ship classes that would seem to seek war and conflict.