Ekkridai is a PNPC on board the USS Victory.

Ekkridai was born to a pod in the South Pacific. He first encountered humans while still at his mother's side, and was fascinated by the way they used so many tools to aid them. This fascination, once he left his mother's pod, led him to the Cetacean Center at the big island of Hawaii. It was there that Ekkridai learned to communicate with humans, through the use of translation machines. By a happy coincidence, not long after Ekkridai arrived there was a call for a group of cetaceans to join a Federation research project, and Ekkridai jumped at the chance. Thus began his Starfleet career. Since then, he has done many projects, and has taught himself as much science as he could. He and his pod (himself and 3 other anthrophilic fen) were conducting a long-term study onboard the Eagle when that ship crash-landed. Ekkridai was the only survivor of his pod. He has since been placed with a new pod, who he is still getting to know, and has been assigned to the Victory.

Ekkridai speaks Delphin, which overlaps somewhat with most other cetacean languages. Cetacean languages are incomprehensible to humans (and indeed any lifeform that isn't naturally aquatic, sonar-focused, or more realistically, both). Even if a humanoid could hear or reproduce the necessary range of sounds, the conceptual basis and perspective are far more foreign than any humanoid language--including Tamarian.

He also speaks Finglish and its offshoot Finfon, which are essentially a (word and phonic based, respectively) mapping of specific cetacean sounds into English. Using Finglisn and Finfon a dolphin may whistle inaudibly at a specially designed translator and in so doing 'speak' English.

He can understand English reasonably well (exceptionally well, for a cetacean--cetaceans are able to understand humanoid concepts, but often have trouble with the perspectives), but lacks the ability to speak it directly. 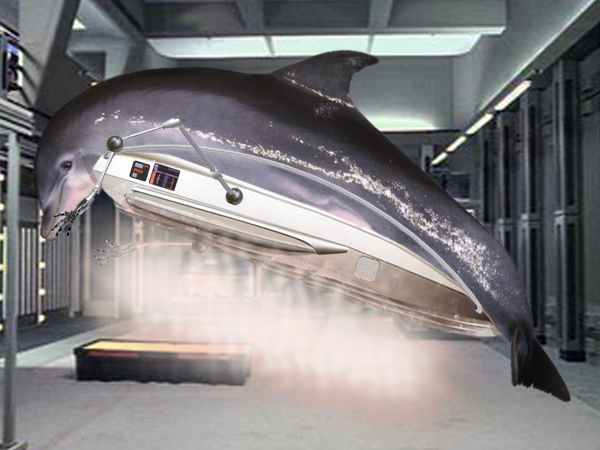