The USS Garuda, as a Galaxy class Starship, is equipped with approximately forty auxiliary craft. This number may fluctuate up or down depending on mission requirements. The following Garuda craft are generally reserved for short notice missions when required by the senior staff.

((It should be assumed that shuttle flights with the 25-ish unlisted craft are being made regularly for routine purposes.))

The Type-9 Personnel Shuttle is a long-range craft capable of traveling at high warp for extended periods of time due to new advances in variable geometry warp physics. Making its debut just before the launch of the Intrepid-class, this shuttle type is ideal for scouting and recon missions, but is well suited to perform many multi-mission tasks. Equipped with powerful Type-VI phaser emitters, the shuttle is designed to hold its own ground for a longer period of time. Comfortable seating for four and moderate cargo space is still achieved without sacrificing speed and maneuverability. As is standard by the 2360’s, the shuttle is equipped with a medium-range transporter and is capable of traveling through a planet’s atmosphere. With its ability to travel at high-warp speeds, the Type-9 has been equipped with a more pronounced deflector dish that houses a compact long-range sensor that further helps it in its role as a scout. The Type-9 is now being deployed throughout the fleet and is especially aiding deep-space exploratory ships with its impressive abilities.

With an ultimate goal towards creating a useful all-purpose shuttlecraft, the designers of the Type-11 Personnel Shuttle set out to create a craft that was equipped with all the systems of a starship within the shell of a relatively small shuttle. Allocation of the larger Danube-class runabout to starships in the field proved too costly, and with the expressed need by the Sovereign-class development team for a capable shuttle, the Type-11 was born. Its overall frame and components are a meshing of lessons learned in both the Type-9 and Danube-class vessels. Impressive shielding, several phaser emitters, micro-torpedo launchers and a capable warp propulsion system makes this shuttle capable of performing a multitude of tasks. Both the ventral and dorsal areas of the shuttle feature a new magnaclamp docking port that is capable of linking up to other ships similarly equipped. A two-person transporter and a large aft compartment with a replicator adds to the shuttle’s versatility. The end hope is that these all-purpose shuttles will replace the more specific-purpose crafts already stationed on starships, reducing the amount of space needed for shuttle storage in already-cramped bays. The Type-11 is now seeing selective deployment outside the Sovereign-class to further assess its capabilities in the field.

A light maintenance vehicle with room for two. The Sphinx workpod is used primarily for extraship repairs and is a common sight in any large shipbuilding facility. Sphinxes are never intended to stray far from their parent ship or facility. They are more varied and versatile than Workbees, but can be more difficult to maneuver for close work.

The workbees have a longer operational time (80 hours) than their Sphinx counterparts, though you wouldn’t want to be stuck in one for that full time. They are essentially hybrids between EVA suits and shuttlecraft: Built for one, but with the tools of a maintenance vehicle for ship repairs. A pair of robotic manipulator arms is folded beneath the main housing, and allows for work to be done through pilot-operated controls. Each Workbee is capable of handling a cargo attachment that makes it ideal for transferring cargo around large starbases and spaceborne construction facilities.

The Garuda, as the lone ship in an unexplored region, carries two autonomous runabouts for long-range missions. The Yamuna and the Zuari are fully warp-capable and armed well for small craft and may be deployed to investigate when the Garuda is needed elsewhere. 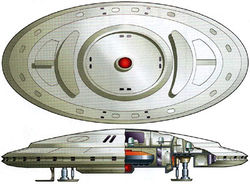 The S.S. Exodus was originally retrieved by the crew of the Mercury during the rescue mission to Valdor III. Following most of that crew's transfer to the Garuda, the Exodus herself was also moved over to the Galaxy class vessel.