The Main Bridge is located at the top of the Saucer section and is the command center for the entire vessel. The USS Columbia uses the same Bridge module as the Galaxy class. It is from here that the Captain and Senior staff take critical decisions and it is laid out as follows:

The Center Chair is occupied by the Columbia's Commanding Officer. To his left is a seat for the Ship's counselor and to his right is a seat for the ship's First Officer. On either side of the seats are small stools which may be occasionally used by a visiting senior officer to the Bridge and occasionally by either the Chief Medical Officer, Counselor or Second Officer.

In front of these center seats are two consoles, to the left the on-duty Operations Officer and to the right the on-duty Helm Officer.

The consoles to the left of the center chairs are for Science Officers, meanwhile the consoles to the right of center chairs are currently used by Security and Communications. Tactical is run from the Bridge shaped console behind/above the center chairs. Behind this is the main engineering console for use by the Chief Engineer. The consoles along the back of the Bridge are interchangeable depending on the mission (e.g.- on a science mission they may back up the science station but during a battle they may support tactical), however at least one of them is designated as environmental controls and for life sign monitoring for use by the Chief Medical Officer on the Bridge. 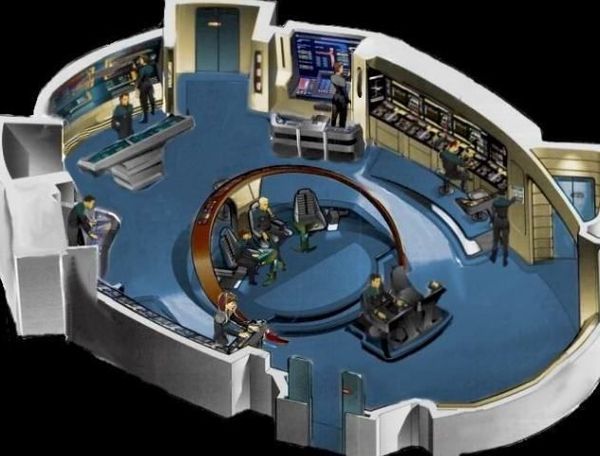