Arika Jojovich-Collins is currently serving as a Medical Officer aboard the USS Constitution.

- Reading: anything she can get her hands on, though she prefers playwrights and dramatic stories. Jo’s a closet romantic.
- Cultural Exploration and Linguistics: though she’s only a rookie at linguistics, she loves to dig deep into the alien cultures she comes upon.
- Swimming: she has done so competitively since she was in grade school/throughout secondary school, and was good enough to continue swimming competitively on her University’s team. Though she’s graduated, she still swims regularly as exercise.
- Attending concerts: while on Earth, Jo loved to attend live concerts that celebrated both Terran music and the music of other cultures.
- Cooking: her mother was a particularly good cook, and helped Jo improve from cooking simple dishes to more complex, multi-component meals. She continued to learn from her mentor about cooking food that other cultures would traditionally enjoy. 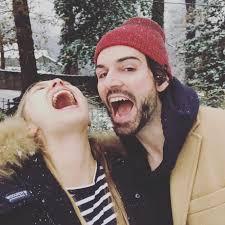 Jo and Tau in Seattle after Jo's residency. Jo is twenty seven, and Tau is twenty.

Jojovich and her father shared a somewhat strained relationship for most of Jo’s life. When Jo was three, Warrin left to serve in Starfleet and was away from home on an exploration. They communicated only though calls and seldom met in person, and Warrin was basically estranged from his wife and young daughter during his time in the Fleet. While he was away, he fell in love with a woman named Esme Sanford, and had a son with her while still married to Jo’s mother, Jean Collins. Jean divorced him and took custody of Jojovich, who already shared both her mother’s and and father’s last names. Jo saw her father a few times a year until she graduated high school at seventeen. Her younger half-brother, whom she now knew as Tau, lived with her father in California. Warrin had joined a family practice so he could stay on earth with Tau’s mother. When Jo travelled to California to attend college and medical school, she lived with the Warrin and Esme and finally began to build a relationship with Warrin, who stepped into the role of a doting father like it was made for him. However, when Jo decided to do her residency away from home, the two lost contact. Jojovich suspects that it was because Warrin felt betrayed that she didn’t stay on earth to work at his practice.

Dr. Collins worked as a xenobiologist and lab specialist in Seattle where she had originally settled with her husband and Jo. Jean took care of Jojovich essentially as a single mother after Warrin left to serve in the Fleet. She and Jo were very close when Jo was a child, and when she learned that her husband had conceived a child with another woman, she was quick to divorce him and take Jo’s custody for herself, hoping to protect her daughter from the man who’d bruised her heart. As Jo grew up, Jean began to suspect that Washington was getting too small for Jojovich, and suggested that if Jo wanted some space, she should seek out-of-state education. She didn’t expect Jo to propose that she stayed with her ex-husband’s new family, but nevertheless supported Jo and kept in contact with her through her education. Jo made sure to visit her mother as often as she could through her education and residency with Teneck, and into the present is still close with her.

Jojovich met Tau in person for the first time when he was nine years old, as she moved into her father’s home in California. She’d always wanted a sibling, and though they were eight years apart, the two grew into a strong brother-sister camaraderie. Of course, after living with the Warrin and Esme for four years, Jo moved out to live in an apartment that was closer to her medical school’s campus, but was still close enough to visit Tau every few few days to take him on adventures around the city and her school campus. While she was with Teneck, she convinced the Vulcan to pick up her brother from earth when he was eighteen to take him “just to a few safe planets”. What came of it was a month-long expedition to see some of Teneck’s favorite spots. While Jo was in Academy, Tau married and had a daughter.

Jo is great friends with Luz, and they share a sisterly relationship. Jojovich feels that there was no one more perfect for her brother than Luz, even though they married so young (Luz was twenty one and Tau was twenty two).

Kalina is Jo’s infant niece. She inherited Tau's dark features and has a tendency to giggle. Jo has held her niece a few times and likes to see her in calls with her brother.

Jo was born in Seattle, Washington. When she turned two she was sent to a college preparatory school that guaranteed that children would with be starting or be done with their first college degree by the time they graduated 12th grade, because her parents (her father a medical doctor and her mother a doctor of xenobiology) expected high things from her. Though her grades were a little below average for such an advanced school, she was able to have started both a degree in xenobiology and in pre-medical by the time she turned 17 and graduated.

Jo hadn’t dreamed of the stars when she was young. If she was really honest, her father Dr. Warrin Jojovich had scared it out of her. His years in the Fleet found him in bed with someone who was definitely not her mother, Dr. Jean Collins, a xenobiologist in Seattle where she’d grown up. The products of Warrin’s affair were Jo’s half-brother, Tau Jojovich, and a divorce. Tau was born when Jo was 7, and though they didn’t live together, as Jo got older she made a point to have a connection with him. Even before the divorce, Jo’s birth certificate read both of their last names, and her first name Arika, which had been chosen by her father based on his aboriginal roots. Her friends had called her Jo or Jojo since she was young, seldom did anyone use her real first name. She’d also asked that she be referred to as Dr. Collins or when it came to formalities.

After graduating, Jo went south for college and attended the University of California in San Francisco. While attending University, she began to become skittish and anxious, due to the amount of time she spent alone in public areas. She finished both her xenobiology and pre-med bachelors and by the time she was 20 she was ready for medical school. She stayed at UCSF to finish her requirements, but was able to get her residency in a sort of unorthodox way.

Through her connections at UCSF, she landed an internship with a xenoanatomical researcher, Teneck (who was Vulcan) through whom she received her license to practice on both the people of Earth and a plethora of other humanoid species. Though she wasn’t as smart as Teneck by far, the two developed an unlikely friendship and Jo was able to pick up loads of medical experience with all different kinds of species. Though the experience was extremely enriching, one setback was that due to the fact that she and Teneck were constantly traveling and encountering new enemies, Jo’s anxiety got worse and it was something she’d deal with through Academy and even beyond. Teneck pushed her to join Star Fleet to exercise the expertise she gained through her extraordinary experience with him, and though she was wary of the idea, she enlisted.