Zhar-kur tei is produced by brewing at 94 degrees centigrade a monocotyledonous graminaceous native to the province of Xial. The brewing produces a bright orange-coloured liquid that has a deep and acidic smell and is appreciated for its stimulating effects. Although this grass is considered an undesirable weed in most of Vulcan, it is widely cultivated in Xial and is one of the most widespread infusions consumed during the first meal among hydroponic farm's workers. 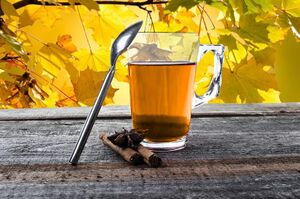 Zhar-kur tei is an important source of methylxanthines, which are central nervous system stimulating alkaloids similar to theophylline, theobromine or caffeine. However, unlike these Earth substances, it is able to produce a significant stimulant effect on Vulcans.

Its consumption by others humanoids is not particularly common and its short and long term effects are therefore not well documented. Nevertheless, on many occasions, tongue and cheek numbness has been reported during intake, as well as excitability, irritability and anxiety for a short time after consumption. It is recommended that caution be exercised when this brevage is offered to non-vulcanoids.