Walter Brunsig is currently assigned as the Commanding Officer of the USS Triumphant. In the past he has served aboard Astrofori One and the USS Drake as the Strategic Operations Officer, and Chief Tactical officer aboard the USS Eagle, Starbase 118 and the Triumphant. He is a human in his early forties and abrupt, gruff, sarcastic, downright rude... and incredibly good at his job.

Armed with a powerful intellect and strategic thinking, Walter can overcome or outmanoeuvre obstacles that seem unbeatable to most. He is characterised by an often ruthless level of rationality, using his drive, determination and sharp mind to achieve whatever end he has set for himself. In any kind of conflict, he can be dominant, relentless, and unforgiving. This isn't because he is coldhearted or vicious per se — on the contrary, he feels very deeply — but that he genuinely enjoys the challenge and the battle of wits, and if the other side can't keep up, that is no reason for him to fold on success.

He respects anyone who is able to stand up to him intellectually, and who is able to act with a precision and quality equal to his own. Walter has a particular skill in recognizing the talents of others, building efficient and capable teams equal to the tasks they encounter, and enjoys mentoring and developing those with promise. However, he also has a particular skill in calling out others' failures with a spectacular degree of insensitivity, and he will simply crush those he views as inefficient, incompetent or lazy.

He is not an easy man to be friends with, often as demanding in personal relationships as he is in professional ones, but anyone who can keep up with him intellectually will find an honest and dedicated friend. Over the years, he has slowly learnt to recognise and adapt to the needs of his friends and loved ones, and understands that even the most rational individuals have emotional needs that must be met.

Walter travels light and keeps very little in the way of personal effects in his quarters. The furnishings are all standard-issue and he has made no effort to personalise his living space beyond the addition of a few decorations. A print of Vincent van Gogh's "The Starry Night" hangs on one wall, complemented by a "Starry Night Over the Rhone" on another. A pair of sturdy, post-eventualist, pre-Matoian sculptures from Bajor sit on a corner table by the sofa. His viola is kept well-protected in its case at all times when he isn't practising, hidden away and out of sight from prying eyes.

Walter usually works out of his ready room on the Triumphant. It is the epitome of efficiency; neat at all times, regardless of workload and completely lacking in any personal touches, except for a sturdy (often partially empty) decanter set. 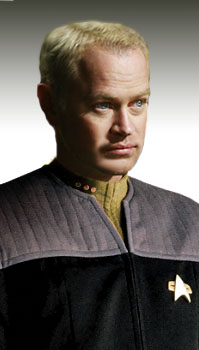