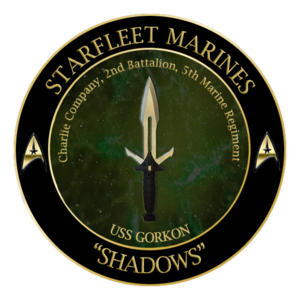 The Starfleet Marines assigned to the USS Gorkon belong to the Charlie Company of the Starfleet Marine Corps' 2nd Battalion, 5th Marine Regiment, nicknamed "Shadows". When not involved in training exercises or specific Marine assignments, the contingent support the Starfleet crew in appropriate departments (for example, Marine medics can be found undertaking shifts in sickbay).

The Gorkon’s marine unit is 15 individuals split into two teams, which includes (at minimum) 2 officers and 2 non-commissioned officers. In addition, the unit has a SFMC trained pilot who serves as flight crew. The entire unit comes under the command of the Chief Marine Officer and the captain of the starship, following the usual chain of command.

The Chief Marine Officer is the marine in charge of overseeing all other marines on board the USS Gorkon, and reports directly to the captain. The Marine administration officer is responsible for any incoming or out-going messages relevant to the marines and takes care of the general administrative duties. The armoury officer is responsible for all Marine weapons and armour, makes sure they are maintained and stored properly and securely.

The Special Weapons and Tactics (SWAT) team are a small squad of Marines who provide additional tactical and firearms support to security personnel. They specialise in VIP protection, hostage rescue, siege breaking, close quarter battle (CQB) and sniper techniques, and primarily operate in the fields of counter-terrorism and anti-hijacking. This team usually consists of a commanding officer, two snipers and three infantrymen.

The Search and Rescue (SAR) team is a team deployed to assist in search and rescue operations in high-risk and hostile environments. The team usually comprises of a commanding officer, a search specialist, two medics, an engineer/communications specialist and an infantryman.

The USS Gorkon’s Marine Team “Shadows” are based on Deck 8, close to main security. The Chief Marine Officer's office can be found next door to the Chief of Security and Tactical, and the Marines share the same facilities as the Starfleet personnel.