When participating in routine ship operations, all Marine weaponry and equipment is stored in the armoury or other appropriate locations. Sidearms and combat knives are not permitted unless specifically required by their current duties (e.g. a Marine assigned to guard a prisoner).

When involved in Marine operations, a Marine will wear:

The Integrated Search and Rescue Armour System (ISARAS) is a modular armoured vest system based on the Crye and CIRAS systems of 21st century Earth, designed specifically for the varied duty requirements of the SAR Team. The vest itself provides moderate protection from physical injury.

Constructed with a hardened ballistic plastic, the CADM (Crystalline Ablative Dispersal Matrix) Ballistic Helmet is fitted with a retractable visor for a full seal. The helmet contains an advanced multi-function communications system. Operated by pupil tracking and a verbal shorthand, the Ballistic Helmet allows a Marine hands-free operation of the unit while concentrating on fighting and other attention-intensive tasks.

The helmet's multi-function communications system can send the Marine's coordinates to units nearby, perform mapping and navigation functions, and project command and mission data on the visor. It also includes a helmet-to-helmet infrared communications link, allowing discrete, short distance communications between individual Marines.

The helmet can be modified to fit the, mission.

Personal protection for a Marine in combat operations is essential. Marine Body Armor is designed to provide a balance between protection and weight. The body armor is separated into upper body and lower body protective gear. The Marine Body Armor consists of the same CADM (Crystalline Ablative Dispersal Matrix) that is utilized in the Marine Ballistic Helmet. The protective vest contains remote biomonitors, which monitors the wearer’s health. 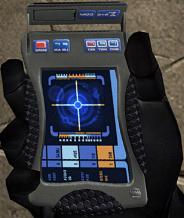 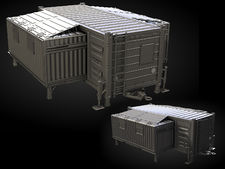 Designed for rapid deployment by shuttle or cargo transporter, the mobile command unit is comprised of a sensor unit, enhanced communications array, mini laboratory, a small armoury and 2 LCARS workstations. 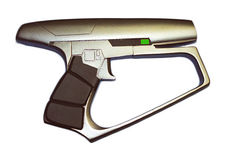 An updated model of the standard Type -II that was used throughout the early 24th Century, the Type-II Compression Hand Phaser (Aquila) pattern was designed for use by the Federation Marine Corps, Starfleet Hazard teams, and for more robust away missions. Along with these design improvements the Starfleet Corps of Engineers simplified the power scale and restructured the emitter to fire phaser pulses instead of a concentrated phaser beam.

The Type 204 SOSAR (Special Operations (SWAT) & Search And Rescue) has the distinction of being the only phaser designed specifically for Starfleet Search and Rescue. Based loosely on the Type 200 rifle -- which is still used by some marine contingents -- the 204 SOSAR includes many improvements, including an adjustable telescoping stock, a rail system to allow the attachment of various scanning and infrared tools, an extremely durable plasteel body and the standard attachment of a grenade launcher (primarily for using "flash-bang" grenades).

A rather larger rifle, the Type 32's base design was adapted to become the Type 33 CQC. A workhorse rifle, the 32 is still used in many combat situations. Many prefer its more ergonomic design to that of the SOSAR. Its length makes the 32 generally ill-suited to SAR operations, but its Operational Support Rifle variant -- the Type 32A OSR -- has become standard equipment in any SWAT team. Essentially a sniper rifle, the 32A goes by the much less militaristic sounding name of "Operational Support Rifle." The 32A OSR shares the same body as the Type 32, with a longer barrel, more advanced and higher quality targeting sight and a folding bipod. The purpose of the OSR is to provide support for evacuations and protection for SWAT Team members performing their duties in hostile environments. 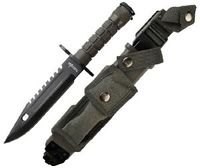 The Marine Combat Knife is a survival and combat knife. It has a single edged twelve inch durasteel blade. The standard issue knife has a matte black finish to avoid reflection and to decrease the chances of detection. The handle contains a small laser torch and a wire saw that can assist a Marine during wilderness survival. Minimal maintenance is required since the blade maintains its sharpness and avoids rust over long term use.

A photon grenade is an anti-personnel weapon that is designed to disperse pulses of phaser energy on detonation.

O-chlorobenzylidene malononitrile also know as Riot Gas (chemical formula: C10H5ClN2), a cyano-carbon, is the defining component of a tear gas commonly referred to as CS gas.

Exposure causes a burning sensation and tearing of the eyes to the extent that the subject cannot keep their eyes open, and a burning irritation of the nose, mouth and throat mucous membranes causing profuse coughing, nasal discharge, disorientation, and difficulty breathing, partially incapacitating the subject.

Small, variable-yield devices that can be used for breaching and destructive purposes.