From 118Wiki
Jump to navigation Jump to search
This page or section is undergoing an expansion or major revamping. Comments regarding possible improvements are welcome on the article's talk page.
This notice was placed here by Lael Rosek. Please pardon my dust. I promise it'll look amazing when I'm done. 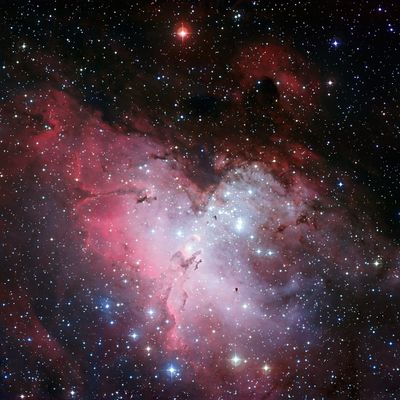 The Eagle Nebula is an emission nebula located in the Alpha quadrant deep outside unexplored Federation space on the rim of the galaxy, nearly 18,000 light years from the galactic center and 7,000 light years from Federation space. It is composed mainly of ionizing gases such as hydrogen (90%) with smaller quantities of helium, oxygen, nitrogen, and other elements present. One notable astronomical feature is a region known as the Pillars of Creation. These regions are filled with massive amounts of interstellar dust and hydrogen gas, fueling a mass amount of star formation.


The most dense patch of star systems is a molecular cluster known as Praetho Cluster, located 450 light-years to the northwest of the Pillars of Creation and believed to be 1-2 million years old. The brightest star in the Praetho Cluster is a binary star system presumed to host more than four dozen planets, of which several are thought to be inhabitable, but a massive installation acts as the center for commerce and diplomacy. The Praetho Cluster is the seat of the Falwen Collective, a grouping of races that range from friendly to xenophobic.

Falwen Collective: This group is made up of various races who range from friendly to xenophobic in their interactions with outsiders.