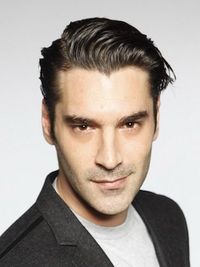 Theo Giannakos is the 37-year-old human governor of Shadow's Edge, the smallest Federation colony of the Colonial Coalition.

Disregarded as the "boy governor" by his rivals given his young age, Giannakos had risen to power mainly on the weight of his family name. His grandfather Bastien Giannakos had served as one of the most prominent council members back when Shadow's Edge had been led not by a governor but by a small ruling council made up of a single representative from each of the planet's disparate settlements.

He had developed a good working relationship and friendship with Captain Rosa Carrero of the USS Veritas, who had been assigned to the Shoals to assist the colonies of the Colonial Coalition as part of Operation Safe Harbor in 2391. On SD 239312.05, Giannakos had been in an evening meeting with Carrero while the Veritas was away when the governor's residence was attacked. Giannakos watched helplessly as Carrero was killed in front of him by the unknown assailants.[1]