Ssandon is currently a civilian private investigator on Duronis II, he often works with the crew of the USS Thunder-A/Duronis II Embassy.

Ssandon can be perceived as deceiving, cruel and sneaky however this assessment could not be further from the truth, his method of gaining information is simply what needs to be done, Ssandon has a deep restraint towards killing another individual and would rather see them locked up for any crimes, when solving crime he tries to spot the obvious rather than the not so because the obvious is what people tend to miss. He ignores his background in the Selayan Nobility but uses it when appropriate, he finds the Nobility system flawed and would like to see a new government installed on the Selay.

Many may call this his job but Ssandon enjoys bringing people to justice and spends many late nights focusing on a case, rather than sleeping (Although he requires little due to Selayan physiology) over his life he has seen many people brought to justice and keeps a record of all his cases, he continues to build up quite an archive of case files.

Ssandon's cases have often led him to be involved with the politics of many planets, on one occasion his evidence had a government leader removed from office, however due to this Ssandon became fascinated with how Governments are run and the many different political ideologies across the galaxy. He has himself formed a political opinion, he was brought up in a society were conservatism was the way of doing things, he was lucky enough to have noble connections so he felt the benefit of the political views of most Selay, however throughout his trek of the universe he has seen the many ways of government and considers himself a Socialist/Liberal, much to the dismay of his brother.

Salork was an overseer at a Duranium mine on Selay, he was considered the most senior overseer in the company, many put this down to the owner being his father in law and the nepotistic aspect of Selayan society. He was born to a working class family and grew up in one of the rougher parts of Selay, he married into the Selayan nobility when he met Ssestas. His father in law disapproved of him, hence he is only an overseer, not a member of the board of directors. Salork was the only person who approved of Ssandon's decision to become a Private Investigator.

Ssandon grew up in a home on Beta Renner, he spent most of his days with his mother and his older brother, he never saw much of his father who worked as an overseer at a Duranium mine owned by his grandfather (A Selayan Noble). While growing up Ssandon developed a keen interest in puzzles and working things out, and when he was ten he got caught up in a murder case when a neighbor was murdered, Ssandon discovered the body and contacted the authorities, trying to figure out the killer alongside the authorities, as expected he was unsuccessful but seeing the murderer getting brought to justice seemed to give Ssandon a sense of relief, knowing there was one less criminal in the world. The feeling made a large impact on his choice of career and when he was old enough he joined the Selayan Police force as an assistant to one of the Investigators.

Ssandon joined the SPF at 25 in order to fulfill his dream of bringing justice to the galaxy, he worked as an investigator's assistant until he became an inspector in 2379. After a few cases he left the force because he felt that the rules and regulations imposed on him interfered with his cases and left to pursue private investigation.

Ssandon had been assigned to Investigator Crak'ssten, one of the most experienced detectives on the force, he chose Ssandon because of his eagerness to help and devotion to justice. The first case Ssandon was involved in came a week after joining the force. A body had been reported buried in the Sesstan desert on the southern continent of Selay, being one of the best detectives on the force Crak'ssten was assigned to the case. At the first visit to the murder scene, Ssandon admired how quickly Crak'ssten had worked out the method of death, and a lead to where they where to go next, Ssandon asked the detective who told him that the key to solving crime is knowledge and attention to the obvious, Crak'ssten had told Ssandon that the clothes the victim was wearing had a pocket and he had simply taken out an ID card and confirmed the identity of the victim (Sten'Stess a Black Market Dealer), and then gained a complete bio, he told Ssandon how many crime solvers jump to complicated theories of how it could of happened, Crak'ssten would simply follow a trail. Crak'ssten eventually solved the case deducing that the man was killed by an unhappy customer called Malcolm Scarall, who had tried to purchase Dominion Weaponry for the Romulan Star Empire. Crak'ssten commented on how helpful Ssandon was in the case and decided to take the young Selay under his wing.

A few months after the murder of Sten'stess, the use of illegal substances on Beta Renner went up by 10%, due to this unusual occurrence Crak'ssten was put on the job and with him Ssandon. Their first lead was a sample of the substance itself, it was a drug from Bolarus IV indicating some Bolian involvement (although this was not confirmed at the time.) Crak'ssten then sent Ssandon undercover to find a dealer of the drug. Due to the mass use and demand of the drug, finding a dealer was not difficult. The dealer Ssandon found was a Bolian called Yull; Yull introduced Ssandon to some of the other members of the dealership, all Bolain. They apparently wanted to recruit some Selay members to fit in with the 'natives.' Ssandon offered to help, but insisted he meet the operator. Yull reluctantly agreed and took Ssandon to an underground warehouse were the operator, a large Bolian named Skell, was dwelling and running the operation. Ssandon worked with the Bolians for six months, long enough to learn names, places, future operations and contacts. He then contacted Crak'ssten, who surrounded the underground base with SPF officers. Ssandon personally arrested Skell. This case gave Ssandon real experience into how criminal organisations worked and how criminals acted, valuable information that would prove useful in the future.

After the exposure of Skell's drug cartel, interrogation revealed the name of contacts he bought key components from. One of these contacts was the Ferengi Drax, Skell told the interrogators that Drax sold weapons much cheaper than most sources, partly because he was operating without a business license. The last sighting of the Ferengi was on a shuttle off-world, the SPF sought permission from Starfleet Security to go after him and they accepted. Crak'ssten requested that the case be given to Ssandon because Drax was not a high priority target but would be a challenge to bring to justice, SPF officials agreed and Ssandon was sent to Secarus III, the last know location of the Ferengi. It was here Ssandon's investigation began. The planet was largley uninhabited, and so it was not difficult to find the location of the small underground facility owned by Drax. After infiltration, it was revealed that Drax had left his hideout two weeks ago, as it was now abandoned. It did however leave a clue of where Drax was going. A shred of paper had been left on the table, with a message - written in Ferengi script - on it. Ssandon took the paper and returned to the nearest Federation starbase to have it deciphered. The message simply read "Hall of Warriors, Qo'nos." Ssandon assumed that, the meeting had already occurred, but headed to Qo'nos to continue his search for Drax.

On arrival at Qo'nos, Ssandon had the Captain of the civilian transport scan the planet for Ferengi lifesigns, it was revealed there were sixty-four Ferengi on Qo'nos, two many to meet individually, nevertheless Ssandon beamed down to the planet to find out what Drax did. Unfortunately for Ssandon, the Dominion War, which was still a year from ending had increased the Security precautions throughout the Klingon Empire and so they didn't take kindly to a member of an obscure Federation Species snooping around. He prevailed and after a few pints of Bloodwine with the aging security captain (Captain Mek'lah), 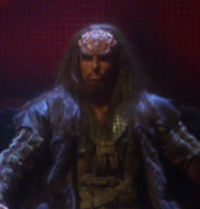 who had obviously ran security at the Hall of Warriors for a long time revealed a thread of information about Drax among his many stories of how he valiantly stopped young boys knocking over the revered statue of Kahless. Mek'lah revealed to Ssandon that Drax was talking to a factory owner named Toq, son of Toran. Ssandon tracked down Toq in order to confront him about Drax. It turned out Toq was the man the Klingon Government turned to, in order to produce the numerous Bat'Leth's and other weapons needed to win the war against the Dominion. He was also considered an dishonorable business man rather than warrior. Ssandon waited one month to get a meeting with Toq, and when he finally got a meeting with him, it went less than smoothly. Toq accused Ssandon of meddling in Klingon affairs and had him removed from his office, Ssandon persisted with his efforts for another two weeks and finally Toq gave in. He revealed that Drax was giving Toq hefty sums of latinum in order to acquire Kingon Disruptors, Toq accepted because he was normally obliged to produce weapons for the Empire, and only paid the bare minimum to cover the expenses, it was not enough to offer himself a life of luxury. Drax payed enough to offer that and so Toq dealt with him, no questions asked. He also revealed the Drax left Qo'nos two days before Ssandon arrived, but was due back in a week. And so Ssandon remained on Qo'nos, with a warrant to bring Drax back to Beta Renner for questioning (Something not mentioned to Toq). One week later Ssandon intercepted Drax before his meeting with Toq, the Selay had spent the week collecting as much evidence as he could about the Ferengi and now he was going to bring him in. Unfortunately, Drax resisted and ran to Toq, telling him the entire story. Toq naturally felt betrayed, as he had informed Ssandon out of misplaced trust. However Toq didn't want to get in trouble with the Federation or Klingon authorities and so readily handed over the Ferengi. Drax was not so ready to turn himself over and as he and Ssandon were preparing to leave on the transport, got off as it was leaving, boarding a different transport, that was heading to Gorn space whereas Ssandon was on his way back to the Federation...

A Private Investigator on Duronis II (Missions on the Embassy)

Ssandon first arrived on the USS Thunder-A as the crew were heading into this mission. After being invited to attend the briefing on the situation, Ssandon was assigned to work with Lt Rossh and Lt Anora in science. He helped figure out the origins of the station. While, Lt Anora was in sickbay, Lt Rossh was called away to join an away team to the station. Ssandon took the opportunity of being alone in the lab to download as much information of the crew he would be working with as he could, the ships Chief Engineer, Lt Commander Mc Ghee found him out, and Ssandon was quickly taken in for questioning by William Tindall and his twin brother Patrick. During the questioning Ssandon was invited to join a second away team to the station led by Captain Valentino. His skills came in useful, but the away teams visit did not lead to much and the team were rushed out to see the conclusion of the mission.