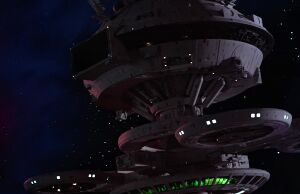 The Rising Sun (formerly Science Station Parkes) is a long abandoned and forgotten Regula I type space station, located in the Shoals near a Mutara class nebula. Its precise location is currently unknown.

It is used as the base of operations by the pirate Henley Marths.

The science station was originally named after the Parkes Observatory on Earth.

Marths hated the original name of the station, so instead named it after a vintage Terran song "The House of the Rising Sun" that an old crewmate of his from many years earlier used to sing.

Base of Operations for Marths

After it was acquired by Marths, the station was virtually untouched from its original condition. The SS Wildfire and the SS Rampart were able to dock there.

The station was used for storing useful loot, supplies, and ship spare parts. It was more like a hidden warehouse than a luxurious hidden lair. Nonetheless, it was the base of operations – well hidden by a large nearby Mutura class nebula, and assisted by localised thick tetryon fields.