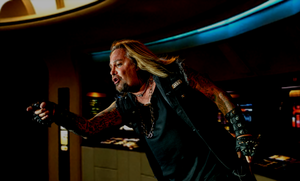 "The Marth" on the bridge of the SS Wildfire

Henley Marths, also known as "The Marth", was a Human pirate operating in the Shoals. He was the captain of the former Starfleet vessel SS Wildfire, and the accompanying SS Rampart, a smaller vessel used for raids and quick boarding actions.

He has been a pirate since his late teens, but only in the 7 years prior to 2397 did he become high up on the Shoals’ most wanted list.

He was captured by Captain Roshanara Rahman and the USS Veritas on Stardate 239707.10.

Born in San Diego, Earth, Henley's parents died when he was 11 years old, after which he left Earth and lived in many different foster homes in several colonies. At age 16, he was arrested on Ketar V for assault, and served a 2 month sentence. During this time, a fellow inmate "Pete" took him under his wing, and used him for smuggling operations. At age 18, Henley joined a pirate gang, where he learned his trade.

Over the course of the next 30 years, Henley spent many years in and out of prison on piracy related charges, both inside and outside of the Shoals. After a 6 year prison sentence, his longest, he performed a brazen yet calculated theft of a former Starfleet Akyazi class ship from a unknown Federation scrapyard for decommissioned ships. It's theft was never detected, allowing Henley to refurbish the ship over the course of 4 years. Soon after "recomissioning" the ship as the SS Wildfire, he slowly attracted a crew, and began raids on smaller freighters and courier ships. His reputation as a formidable pirate slowly grew over the next 7 years, with notable raids on larger freighters, ships and pleasure cruisers.

His main source of income was the selling of stolen goods from ransacked ships to the Orion Syndicate.

Henley is self-confident, arrogant, and presents a relaxed persona. It is alleged he has a weakness for attractive female humanoids. His growing success can be attributed to his above average natural risk analysis skills. He is also tactically intelligent, due to his extensive experience from his time as a member of other pirate syndicates. He was known to be benevolent to his crew, however any crew member that fell out of line was harshly punished. He has a reputation of being stubborn.