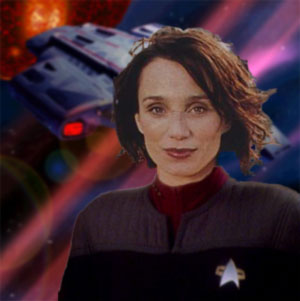 Tara Nystrel lost her father and mother early in the Occupation, taken from their house when she was three. Her brother Tara Lorschal raised her. Eventually, they were both recruited into the B'laya cell of the resistance. When she was eighteen, she rescued a fifteen year old Bajoran from a Cardassian about who was about to shoot him. Rhys Bejain subsequently joined the Resistance. They fought together for three years, eventually becoming lovers. They concieved once, but Nys miscarried.

When liberation came, Nys was accepted into the Militia as a Captain. She was placed in command of the main military communications facility on the northern continent. Eventually she was promoted to Major and given the job of First Officer of the Bajoran cruiser Denaya under Colonel Ro. During this time, she and Rhys started seeing each other again.

However, a year into the commission, against orders, Colonel Ro took the Denaya into the Gamma Quadrant to search for the Bajoran dissident Jolicur. It was an action that cost the lives of twelve of her crew. Colonel Ro and Major Tara were courtmartialed. Tara was demoted to Captain, and Ro was discharged and spent three years in prison.

Upon hearing the story, Captain Mwangi, original CO of the USS Triumphant, offered her the job of Chief Tactical Officer. She accepted and transferred to Starfleet as a Lieutenant. She was on the Triumphant for three years.

After three years, Captain Mwangi was reassigned to the USS Tucson. She stayed on the Triumphant (the only crew member to do so) as Chief Duty Officer. Her relationship with Rhys Bejain continues to go from strength to strength

Lieutenant Tara has recently been diagnosed with Kalla-Nohra syndrome. The disease is fatal in Bajorans, and she is currently under the care of Dr Solok.