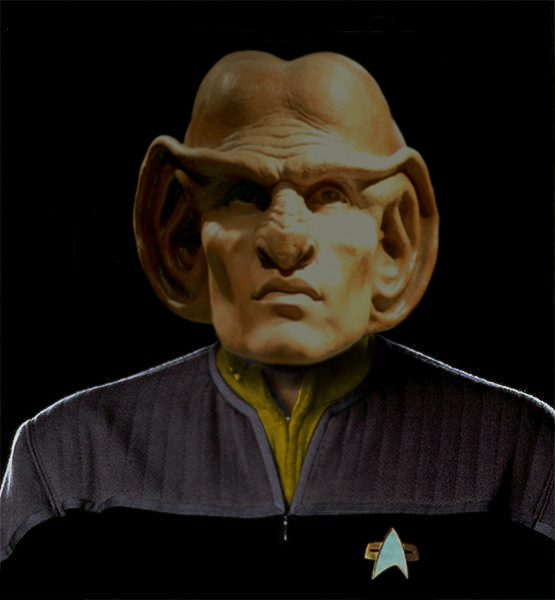 Lieutenant Ralik, a Ferengi currently serving as an engineering officer aboard the USS Independence-A

Height: 5'3"
Eye Color: Brown
Weight: 150lb
Build: Medium
Taste in Clothing (when off duty): Tends to go for typically Ferengi styles, very bright and colourful. However he has found a new liking to Japanese clothing styles since he started taking Ju-jitsu classes with Chief Ayaka. After looking into ancient Japanese culture he has grown an admiration for it.
Voice: Confident and quick, a traders voice.
Handedness: Ambidextrous.

Started tinkering in Engineering of his fathers Ferengi Marauder at the age of 9. Was a paid member of the crew at 13 and Chief Engineer at 22, a position he held for four years until he was accepted into Starfleet Academy.
Initially applied for the Academy at 21 with the backing of Starfleet Commander Randall though his application was rejected. After another meeting with Commander Randall at 25 he re-applied and was accepted. At 31 he graduated Starfleet Academy and was assigned to the USS Independence-A.

Rule of Acquisition number 223: Beware the man who doesn't make time for oo-mox.

Mannerisms: Is a very friendly individual who attempts to put a pleasant atmosphere over every situation. He has typical Ferengi mannerisms like a scurrying face paced walk when busy or in a hurry, and a passive chuckle often used to break what he anticipates will be an uncomfortable silence.
You'll occasionally witness him dropping a Ferengi Rule of Acquisition into a conversation if it is fitting to do so. He frequently allows situations where a rule could easily be said to pass without doing so, since he is usually the only Ferengi and he knows his peoples' general reputation which he doesn't want to be seen as owning.


Quarters: Having just recently been assigned quarters of his own after his promotion they are still fairly standard. He does intend to personalise them a bit as time progresses.
Favorite Room: After Engineering, the holodeck. He likes to stand in torrential rain holodeck programs from time to time to remind him of Ferenginar, and often does this in a program of the Ferenginar capital city.
Habits:
Hobbies and Pastimes: After a few months posted on the Independence, he took up ju-jutsu classes being trained by security officer, CPO Ayaka Kumiko.
Likes: Oo-mox (no yellow blooded Ferengi male doesn't).
Dislikes: After a very short time in the field, he realised he gets very fearful of face to face combat. This was sparked by the Grendallai.
Ambitions and Goals: Loves the world of engineering and an engineer at heart. He has no real command ambitions, instead his ultimate career goal is to be a highly reputable Chief Engineer of a major Starfleet vessel.
Achievements in Life: Was made Chief Engineer of his fathers Ferengi Marauder at 22 years old.
Disappointments in Life: When his initial application to Starfleet Academy was turned down when he was 22. However he was made Chief Engineer of his fathers ship a few months later.
Temperment: Very jolly and always tries to put a good look on a bad situation where appropriate.
Mental problems (complexes and phobias): Since leaving the Academy he has found that he is very fearful at the prospect of face to face combat situations. Though he has not yet experienced one, he has felt the fear many times.
Physical Limitations:
Heroes: Dr. Reyga, the Ferengi scientist who invented metaphasic shielding. One of the first to have non-Ferengi look at Ferengi in a light other than greed.

Ralik once believed very heavily in the Ferengi religion of the Divine Treasury and the Great Material Continuum, though he started to question those beliefs in his mid teens and by his twenties he held very little faith in it. This is just as well, since if he had continued to be a follower he would not have joined Starfleet.

Born on Ferenginar in the village of Korpa, Ralik’s childhood was filled with his father’s financial teachings and he had learned the Rules of Acquisition to memory by 4 years old. Dak, his father, was a successful DaiMon of a D’kora Class Marauder, a position which he had purchased in 2345. However he lost much of his financial empire like many Ferengi in the Great Monetary Collapse of the early 2350’s, though he maintained his title and command throughout. Around the time of Ralik’s birth in 2355, Dak’s success took a turn for the better and he started to increase his wealth and elevate his status once more. Being somewhat superstitious he put much of this success down to the presence of his son, hailing Ralik’s birth as the turning point for his fortune. Due to this he kept Ralik with him as a kind of luck charm, resulting in most of his childhood and beyond being spent on board the Marauder.

At just 9 years old Ralik took an interest in the workings of the ship, and would often be found in engineering asking questions to the engineers who were more than happy to answer the queries of the DaiMon’s son, thinking it might give them better standing with the DaiMon and consequently opportunity for profit. It wasn’t long before the engineers had him helping out and often delegating jobs to him to reduce their workload, seeing him as a free employee.

In 2364 the Ferengi Alliance was introduced to the Federation and over the coming years DaiMon Dak would negotiate several trade routes with them, exposing his son to Starfleet at an early age. In 2368 at 13 years old, Ralik’s father took him on as an official member of the crew after Ralik began to demand payment for his services.

During the years he served on the Marauder he made countless business transactions either solely for himself or as joint ventures with other crew members. With some of the accumulated wealth he invested in several business ventures with varying success. By far the most successful of these is the freight company which he started from scratch and is the sole owner of. Being the son of a DaiMon it was almost natural that he go into some form of couriering, plus the contacts he made in those years made the start-up and growth almost easy. The company employs around 20 Ferengi and is run in Ralik's absence by Toki, the man Ralik trusts the most, at least by Ferengi standards.

Ralik also owns a security escort firm which started as a necessary tack on to his freight business due to the frequency of high value shipments or high risk shipping routes, or both. Initially he outsourced security to Breen or if unavailable to Nausicaan's. Since this was far from the most cost effective way to do this, as soon as profits allowed it he invested in five single pilot fighters which he got discounted as a bulk buy from a Ferengi associate. They weren't in the best shape but they were adequate to warn off potential pirates, and have since been rebuilt and upgraded. Employing eight pilots the firm is overseen by th'Clane, an Andorian, and shadowed by Toki. Over 60% of it's income comes from Ralik's freight company as an add on service.

2364 – 2368: Starting tinkering with starships at 9 years old and become a full fledged engineer at 13, Ralik had been around engineering throughout his major learning years resulting in him being able to pick up the workings of many technologies very quickly.

2373: Ralik had always looked upon the Starfleet vessels he encountered with awe, and when word that a Ferengi had entered Starfleet reached his ear, it planted a seed of thought of his own possible career on board one of those ships.

2374: Grand Nagus Zek added an amendment to the Bill of Opportunities allowing Ferengi women to wear clothes and conduct business ventures. This change in attitude along with other changes such as making monopolies illegal encouraged Ralik to start to privately pursue his now nurtured dream of a Starfleet career by learning about the organisation in depth.

2375: Grand Nagus Rom is appointed, and with the knowledge that the only Ferengi in Starfleet is the son of the new Nagus, Ralik tells his father of his interest to enlist to Starfleet. His father sees this as an opportunity to share common ground with the Nagus and encourages his son, much to his surprise.

2375: Ralik is disappointed to learn that he must have his application endorsed by a Starfleet officer since Ferenginar is not part of the Federation. The search begins for such an officer and he approaches his father to speak with his contacts in the Federation.

2376: An officer who Dak had worked with many times in the trade route negotiations, Commander Joseph Randall, agreed to endorse the application after interviewing Ralik and being impressed with his vast engineering and Starfleet knowledge and eagerness to join Starfleet. However, Ralik’s application was refused as many applications every year are, severely disheartening the young Ferengi. He decided then to concentrate on his duties on his father’s ship, then soon after was appointed chief engineer on the Marauder which pleased him greatly.

2380: Ralik encounters Commander Randall again for the first time since his application, who is disappointed to learn that Ralik has given up on Starfleet due to being turned down initially. Randall, after a lengthy discussion encourages him to reapply, which Ralik does with a renewed sense of ambition. This time, after 14 years of engineering experience at the age of 25, he is accepted.

2386: Makes the trip to Deep Space 17 to rendezvous with the USS Independence-A, his first posting as a Starfleet Engineering Officer.