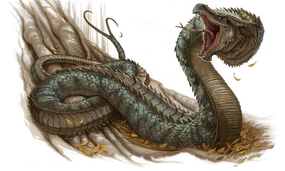 Julian is Phrik's pet snake, a 102 year old Fringed Stycore, native to the planet Troporox III. He is 120cm long and weighs 4.7kg. Julian was discovered by Phrik as an abandoned egg near a recently established colony. Already conducting research on the potential medicinal properties of the species' venom, Phrik took the egg and raised it himself as an experiment. The name Julian was coined by a coworker at the time, and despite Phrik's protestations the name stuck. It wasn't long after hatching that Julian evolved from science experiment to pet and companion. Since then, Julian has accompanied Phrik almost everywhere. The pair were briefly separated by Phrik's stationing on the USS Avalon, the ship not allowing pets onboard. Julian was placed in an animal sanctuary on Starbase 118 for safe-keeping. After the destruction of the Avalon and Phrik's stationing on Starbase 118 ops, Julian was readopted and now resides permanently in Phrik's quarters.

Despite his fierce appearance, Julian is an incredibly tame and social animal. He is particularly fond of mammals, having a tendency to wrap himself around limbs and necks for warmth. He also has a habit of giving people soft nips with his teeth if he isn't getting enough attention.

Iris is a young Pink-Crested Sprotebird Phrik found abandoned by it's mother on Raskor. She is currently 20 centimetres tall, with a wing span of 70 centimetres. The Phrik discovered the young bird cowering in a hollowed out fallen tree trunk while trekking through the Raskorian wilderness. With the permission of Captain Taybrim Phrik elected to bring the bird back to Starbase 118 and raise it himself.

Still being to young to leave alone, Iris accompanies Phrik almost everywhere, usually perched on his shoulder. She has already displayed an increasingly voracious appetite, attempting to gnaw on almost anything she can find, especially PADDs and combadges. Though her usual diet consists of dried nuts, fruit and live beetles. Iris has imprinted on Phrik, believing him to be her mother and attempting to mimic his behaviour.

CHRONOLOGICAL HISTORY: Phrik was born on the sparsely populated Edosian homeworld, Edos. He spent much of his early life reading encyclopaedias of alien worlds, fascinated by the aliens present there. Because of this he left Edos at the young age of 24, enrolling in a university and gaining a masters' degree in xenobiology by the age of 30. From this is was only a small step to the field of medicine, he enrolled in a medical school, becoming a fully qualified medical doctor some 8 years later, and taking up a junior position in a colony hospital. He flitted between worlds and jobs often, never being satisfied with the variety of species and injuries he encountered in his work. Most of these positions weren’t particularly noteworthy, save for a traumatic experience during the Cardassian war, in which a colony he’d recently moved to came under attack.

Following the death of his parents, Phrik came to the realisation that he wouldn't live forever, and that when he died his legacy, along with his family's would be forgotten. Rather than sire a child of his own to carry on his legacy, as most Edosians do, Phrik decided to join Starfleet. Seeing it as an opportunity to do something to be remembered by, such as curing a disease or discovering a new life form.

Phrik is a solitary and prickly person, preferring to spend most of his time alone, away from others. He’s cantankerous, cynical and stubborn, also possessing a very dark and dry sense of humour, which often manifests at the most inappropriate times. Despite being a skilled doctor, his bedside manner leaves a lot to be desired due to struggles understanding emotions of others.