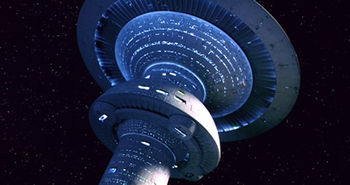 The USS Albion was brought into action as Starfleet deemed the emissions coming from the Jenatris cloud troublesome enough to investigate. The Albion found a web of Romulan-make satellites were set through a section of the Jenatris cloud that was nearest StarBase 118. These satellites had alien modifications to the original Romulan design and were connected by a sophisticated subspace communication grid connected by tachyon waves.

The USS Albion was able to carefully disconnect one of the satellites in the web and transport it on board for examination. Shortly thereafter they were attacked by a cloaked Romulan ship, and the resulting firefight disrupted the satellite network. As the network collapsed, a massive subspace anomaly opened up (this being thee same sort of anomaly other ships have witnessed). As the anomaly interacted with the unstable Jenatris cloud it formed a massive ion storm of terrifying proportions, trapping both the Albion and the Romulan ship inside.

StarBase 118 Ops is being threatened by this ion storm, but have also noted the anomalous readings from the storm, and are struggling to understand the satellites role in the creation of the storm in the hopes of dissipating the storm.

In the aftermath: Starfleet had two of the Sicarian modified satellites to investigate - one intact, the other badly damaged. One Sicarian agent (Adrijan Lukic) was apprehended while Starfleet Intelligence was still in pursuit of the second.

The satellite web was collapsed and the remaining satellites badly damaged when the anomalies were closed. There were some faint diplomatic whispers that Starfleet may offer Romulus some resources on rebuilding the satellite to their original purpose (scanning and communication beacons) as a goodwill offering in the aftermath.

The ChR Asphodel returned to Romulan space, the Romulan agent Kereth had returned to the Avronis system to regroup with his own crew, and the Sicarians have pulled away from the Romulan political/terrorist group Resiliency leaving the group to fall into internal conflict between its two main factions.