From 118Wiki
(Redirected from Peppalexa)
Jump to navigation Jump to search

The Peppalexans are a warp-capable, starfaring species that, before 2392, were known only from records of the Ancient Alliance that once operated in the Menthar Corridor. According to those records, the Peppalexans were once an integral and powerful member of the Alliance before they disappeared from Alliance records at the beginning of the Alliance's decline. Historians have long assumed that their disappearance was due to several socioeconomic and political factors and that fragmentary records that indicated that the entire species had "vanished without a trace" were records of some myth or morality tale.

Land consists of two smaller landmasses (continents) and several large islands. Many smaller island chains are found throughout the planet’s oceans. As technology advanced, artificial islands were often used to supplement areas where burgeoning population made space a limited commodity.

The Ancient Alliance (or just Alliance to Peppalexa) was formed in response to incursions of these aliens into normal space, which caused significant damage to subspace. A massive quadrant spanning war took place between the Alliance and these aliens that lasted for at least 200 years. The temporal accident took place roughly thirty years before the last known Menthar colony was destroyed.

Ancient Alliance records indicate that the Peppalexans had a dominant culture that supported trade and exchange with the rest of the Alliance but was, in a word, lackadaisical. Much of the members of that dominant culture seem to have spend their time pursuing activities that kept them close to or on the homeworld, made use of the natural environment, and cherished the creation of art -- cloud sculpting, tectonic craftwork, and other pastimes that have no direct modern equivalent -- though there was a minority culture that operated in tandem and represented most of the Peppalexans who would travel beyond their homeworld.

This minority culture seems to have had a counter-Federation approach to dealings with aliens: Rather than leaving pre-warp aliens alone to develop on their own, the Peppalexans would directly interfere, helping races to achieve warp travel, technological prowess, and artistic nirvana. The Ancient Alliance seems to have been counted among its number several of the Peppalexa's former "pupils," though how they fared after the Peppalexan homeworld's disappearance is unknown.

However, when the Peppalexan homeworld suddenly appeared in the Piktar System in 2392, the USS Garuda was immediately dispatched to investigate. The homeworld's appearance, which occurred directly on top of a strange stellar phenomenon that orbited the Piktar star but hasn't been seen since the planet's appearance, brings with it the entire homeworld population of Peppalexa -- some several billion individuals -- who will no doubt want to know when they suddenly find themselves. 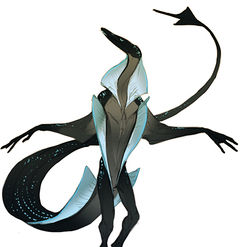 Tall with slender bodies, Peppalexans are bipedal with strong legs, though they can walk on all fours to "sprint" for short distances on land. Long tails with fins provide the ability to swim faster. They also have elongated noses, lizard-like eyes, and three long fingers on each hand. Skin flaps and and bio-luminescent hues on their bodies change based on mood.

Peppalexans are amphibious and capable of breathing air and water - gills can be seen within neck skin flaps. Their smooth skin exhibits a 'slimy' membrame of which is thick enough to provide minor protection from phasers set on low stun settings. Peppalexans are a cold-blooded species.

Peppalexans are comfortable both in and out of the water, though high humidity environments are strongly preferred. Prolonged time spent in extremely dry environments generally requires a special moisture suit to keep individuals from drying out.

A very small proportion of the population is larger and more ornate, and in the case of the females, able to bear more young. It is difficult to distinguish with certainty in the males, but easy in the females, who are denoted ‘Ooyi’faen’. Normal females are ‘Iiya’fret’. It is an ancestral type that was largely selected against due to overpopulation pressure, before the rise of civilisation.