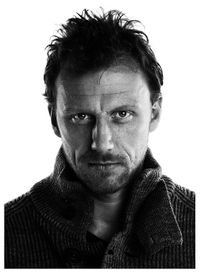 Patrik Novak is human in his forties and an associate of Lenik of Vulcan. He has a dark trimmed beard with a hint of gray.

Novak served in the Dominion War as an enlisted Starfleet Marine but didn't stay in the service after the war finished in 2375.

He met his wife during the war after the Romulans joined the fight. He later learned his wife had reunificationist beliefs. She sought asylum in the Federation, but Novak and his wife still faced troubles from the Romulan Star Empire, which believed she was a Federation spy/agent given her relationship to him, and were treated with general distrust from some of their Federation colleagues because of her Romulan heritage. Still, they managed to start a family with a son and for a brief time were happy.

After the Hobus supernova in 2387, Novak's wife wanted to live and work with the Romulan refugees that were being resettled by the Federation on Bilire VI, especially as many were political enemies of the Empire including reunificationists and pacifists. His wife and son though contracted the Wrath plague during the outbreak on the planet and died.

Novak subsequently moved to the Seheik Settlement with some of the other reunificationists. He lived there for a few years before he eventually grew impatient of the Elders running the settlement and the inaction he felt they took with the needs of the settlement and the hostility they faced from outside the community. He met Lenik and subsequently became his associate and traveled between the Shadows and Shadow's Edge, where he learned how to handle Draafs, a local carnivore species, to use as a tracking and attack animal.