Mikk Toral, an unjoined Trill, is currently Chief of Security aboard the USS Gemini.

When off-duty, Mikk prefers normal, casual clothes. He often wears jeans and shirts or t-shirts. His favourite colors are black and blue.

Surprisingly enough when you know him on duty, Mikk Toral's quarters can be slightly messy at times as he is not really very good at keeping perfect order. So you might find some socks or uniform pants lying on the floor or on the bed. Or there might be some padds on the table that haven't been put away yet from the day before.

He keeps several things that remind him of his family back on the Trill homeworld and of course of his daughter Alarra. He also likes to have some plants in his quarters as the standard room is too sterile and cold for him.

Mikk Toral does not have a favourite room. However, he likes being with his daughter. Home for him is where his family is.

Mikk Toral tends to knit his brow when he is brooding over a problem.

Mikk likes to play holo novels in his free time. Although he works in security, his favourite free-time holonovels are (also) detective stories, as he likes to solve the riddle of finding the 'bad guys'. Apart from that he likes doing some sports as this helps him to stay fit and to get his head free again after a long day of scientific research. 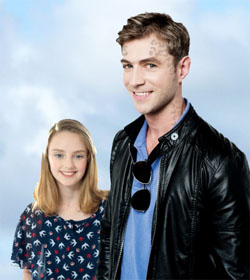 Mikk and his daughter Alarra on Deep Space 224

Due to his own experiences in his childhood days, Mikk has a good sense of fairness. Mikk Toral is an idealist. He sticks close to the rules and regulations of Strafleet as he thinks they are the guarantee that everything is dealt with in the best possible way. His major task - as he sees it - is to provide for the safety of the ship and the crew and in a wider sense the Federation. So the old earth police motto "to serve and protect" really fits him best. Mikk doesn't like to have to use his weapon and tries to avoid it if he can. If he has to use it though, he wouldn't hesitate to do so either.

On the one hand, Mikk Toral has a fairly frank and cheerful character. Furthermore, you could describe him as rather selfless as he tries to help others when they need help. Therefore, he worked very well in teams. On the other hand, it takes some time until he really calls someone a friend and he has only a handful of really close ones. If he got to know a person and likes her / him, he is a good sport. He really likes bantering with his friends. During his time at the Academy, he wasn't hostile to student life and spent lots of evenings out with his friends. He still likes to get to know new people and is quite a social person. However, there are those times when he needs to be alone. Then he is not in the mood of talking and just wants to sit in the dark looking out the starship's windows into the vast space outside. A negative character trait is that he can be quite grumpy early in the mornings and he needs at least two cups of strong black tea before he starts to feel and act okay again.

His daughter Alarra really means the world to him, so it is really hard for him not to be able to have her onboard the Gemini for now. However, as he is a single parent and there is no other close family member, it is his greatest personal concern to make this happen as soon as it is possible.

Mikk Toral is not always as self-confident as he wants to make others believe. This is due to his childhood experiences when he was bullied by others. He tends to cover this especially since he has become the legal guardian of his younger sister, but deep inside this still frets him sometimes. These are often the times when he wants to be alone. 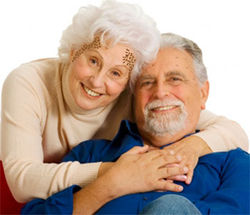 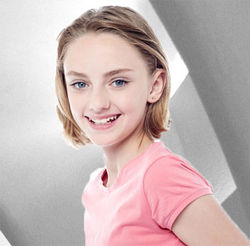 On stardate 236406.25 Mikk Toral was born as to Kall and Boldara in the city of Gheryzan on the Trill homeworld. He would describe his early childhood days as a really happy time. The problems started in primary school when some kids started teasing him because of his lighter, unincisive Trill spots. His parental mother was human and this could still be seen. Mikk was really afflicted with that bullying. It took some time before he told his parents about it since he was afraid it might get worse when the other kids found out he told them about it. Eventually the problem could be solved with the help of the teachers and when he got older, he found some real friends. Nevertheless, this episode in his life still plays a major role for him, although he wouldn't admit it to anyone apart from his really close friends.

When he turned 18, he tried to get into the joining programme, but his application was turned down by the Symbiosis Commission because of possible problems for the symbiont due to his human grandmother. This argumentation really hurt him inside as it revived his childhood memories of his time being bullied. He decided to leave his homeworld shortly afterwards to join Starfleet Academy.

Mikk Toral joined the Academy when he was 18 years old. He saw this as a chance to get to see more than just his homeworld and to satisfy his curiosity. Another reason for his decision was that he really wanted to be part of this big, peaceful organisation to help others. It took some time until he decided to concentrate on the security department. Due to the tempts of student life, his marks at the Academy were mediocre and he completed the Academy with 56 credits all in all. He didn't spend much time learning and was nevertheless able to pass the tests and courses. Sometimes he wonders what his results might have been if he had really made an effort. But then again he thinks that these years at the Academy have been the best ones up until now.

During his time at the Academy, he fell in love with a fellow cadet from Earth. The 'result' of this love affair was a little girl called Alarra.

After his graduation of the Academy and his cadet cruise, he was transferred to Deep Space 224 where he worked as a security officer. Shortly after being transferred there, he found a message of his girlfriend and mother of Alarra. In this message she told him she had to leave them as she just could not lead a life like that. No more explanation was given. Since that message, he has never heard anything from her again. Alarra was still too little back then to remember her mother and Mikk doesn't really want to sepak about her. He was now a single father for Alarra. On Stardate ??????.?? he was transferred to the USS Gemini. As he was not able to bring his daughter, she stayed back at the Starbase with the family of his best friend. Mikk's plan however is, to get her onboard the Gemini as soon as he can as he wants to be near his daughter.