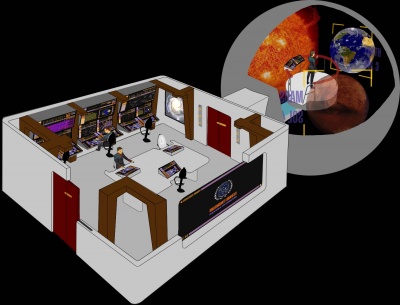 Main Science, also known as the Observatory, is large enough to be reconfigured to act as a tertiary option for bridge control should the need arise. Taking up the majority of deck 24, it is comparable in size to Main Engineering, and includes three three-dimensional holographic displays, two located at either end of the facility, and one larger display located in the centre. A viewscreen comparable in size to the one on the Main Bridge is mounted on one of the walls, and the consoles are tied directly into the sensor module systems' input, allowing for speed and ease of data manipulation. The Chief Science Officer's office access is contained in this facility, and its main console has the ability to tie into and monitor scientific research being undertaken in any of the sensor modules' labs, including the four medical labs in sickbay.