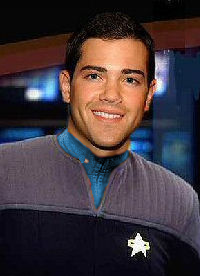 Ensign Marvin Brolin is head nurse aboard the USS Drake.

Born in a small town on earth called Salt Flats, Ohio, population 500+, Marvin grew up with a pretty standard childhood, going by the times...He attended all grades of school, with little or no complications. Loved attending class, and learning. An avid writer, and reader. Marvin spent his free time reading books, or assisting his mother with her work. His mother Lindsay is a geologist. Marvin had friends, and one in particular, named Phillip. They would hang out together, pulling pranks on their parents, and others they knew well. Marvin, took his first drink of alcohol at the age of thirteen, some brandy he took from his fathers private stash. His first kiss with a girl came at age 14, at school, behind the gymnasium. Marvin's luck with women has not been so eventful since...

At age 18, Marvin left home to join Starfleet. Studying Nursing while trying to graduate. On 238605.22, Marvin graduated from Starfleet Academy with honors. 3rd in his class. And 2nd in his Nursing courses. Marvin is an attention to detail, go by the book, kind of guy. Marvin was first assigned to Starbase 118, where he learned the medical skill of dentistry. He graduated 2 years before everyone else, as a fully credited Orthodontist. On 238610.24, Marvin was re-assigned to the USS Drake, NCC 1987..where he was placed under the CMO, Dr. Dantin-Vex. Marvin performed as the Ships only Dentist, and rarely had the chance to do Nursing duties. When the head nurse, Ensign Marcus Sung fell ill..The CMO placed Marvin as acting Head nurse, until further notice.