Ensign Jehe Saja is currently serving as an Intelligence Officer aboard the USS Thor, her first posting after graduation from Starfleet Academy. 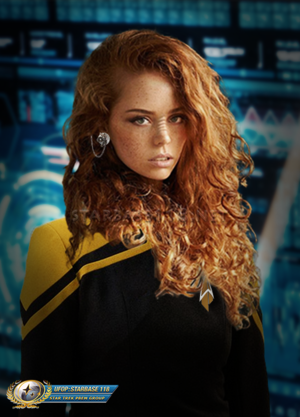 Lt. Commander Pandorn is Ens. Jehe's immediate superior aboard the USS Thor and the two are currently feeling each other out and attempting to establish a rapport.

Jehe Saja was the third child (and first daughter) of Bajoran Occupation refugees who had resettled, after the end of the occupation, on the Bajoran Colony of Free Haven. Saja was raised on tales of the Occupation, and the recovery efforts the Bajoran people had just begun prior to her birth, during the heart of the Dominion war. Her maternal Grandmother, Tamil Nial, and her mother, Boka, had escaped the worst of the Occupation when their ship was rescued by a Starfleet vessel. Boka grew up on Earth, after Nial married then Lt. Kevin Oranoka. Her mother eventually met Prylar Jehe Rezka, and the two fell in love, relocating to Free Haven, where young Saja was eventually born. After the end of the Dominion War, Retiring Commander Oranoka and his wife Nial relocated as well, to settle down with their daughter, and spoil their granddaughter. While Saja never knew anything about her biological Grandfather, she would eventually follow in the footsteps of the man she knew as Grampy Oranoka, applying for service in Starfleet. She'd found his stories about his service in the fleet to be far more of a calling in her heart, than the efforts of her father to steer the young woman toward the priesthood. While she shared Rezka's faith in the Prophets, Saja did not share his calling to Their service. Strange new worlds was the future that Saja wanted.

The product of two worlds and cultures, though biologically wholly one, Saja is taking her first steps into the galaxy at large.