Ensign Ilyazi Malon, is currently a medical officer aboard the USS Columbia.. 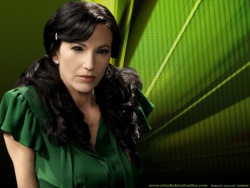 Friends and other relationships

Jordyn Marika is a Bajoran/Betazoid hybrid that Ilyazi previously had a romantic relationship with. 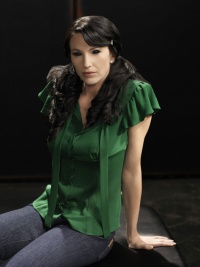 Born just a year before the Occupation of Rodul, Ilyazi lived with her parents, Mananu and Halatia, and her brother and sister, Trindol and Mishixa. Her father, Mananu, is an agricultural farmer, while her mother, Halatia, is a professional artist, specialising in portrait painting. Trindol worked the land with his father from an early age. Mishixa, although the elder of the three siblings, could never decide what she wanted to do, and would dabble in *everything*. Ilyazi's home life was a fairly happy one, despite the Cardassians occupying her world, and because of the difficulties everyone faced, she grew up having a strong family bond.

Outside of the home, though, Ilyazi's first 28 years were spent fighting for survival, and she is very tight-lipped when it comes to the latter years of the Occupation. At the age of 12, Ilyazi discovered the downside - or in that circumstance, upside - of her strong telepathic abilities. Two Cardassians, who had taken her sister, were left with severe neural decay as a result of Ilyazi's probing their minds. Unfortunately, she was unable to stop them from taking her sister.

At the age of 19, she also was captured by the Cardassians, but Ilyazi was able to use her telepathic abilities in such a way that she garnered favour with individual Cardassians. She was able to plant suggestions in their minds, and from this she slowly made her up way up through the ranks of Cardassians, gently teasing information out of them, though she was never able to uncover what happened to her sister. When the Occupation finally ended in 2352, she was returned to her family, though her sister was never found.

Ilyazi helped for several years to rebuild her family's home and town, but the thought that the Cardassians might well return one day turned her thoughts to the stars, and exploring them. Not all civilizations could be as brutal as their Oppressors, she reasoned. Ilyazi left Rodul in the Fall of 2360, and sought a life for herself as a civilian in the Federation. When that no longer satisfied her, she applied and trained to become a Counsellor, and worked for many years in that capacity before training to become a Doctor.