The Ietai system is a unary star system in the Tyrellian Sector, located in the Beta Quadrant. It has no native sentient species, and is a former colony of the Romulan Star Empire, now aligned to the Republic. It escaped wider notice for a long time, being of little strategic importance to anyone — until it was discovered the planet has significant deposits of benamite. Realising what they had, the Republic invited the Federation to help them mine the crystals, a manoeuvre that has stopped the Empire from attempts to reconquer the territory. However, tensions flare on a regular basis, more so as the Romulans have started exerting a greater claim on the mining output as they have brought their own slipstream drives into service. 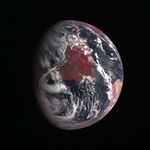 Væron is the fourth planet in the system. It is an M-class planet with a similar climate to Earth, including generous polar ice caps. The brightness and transmitted light frequencies of the system's star have caused the foliage of the planet to evolve a distinctive blood-red hue, and the surface and seas support a variety of wildlife. The Romulan Star Empire established a colony several hundred years ago, and many of the older settlements have a sleepy, provincial feel, their buildings low and constructed from local stones and materials.