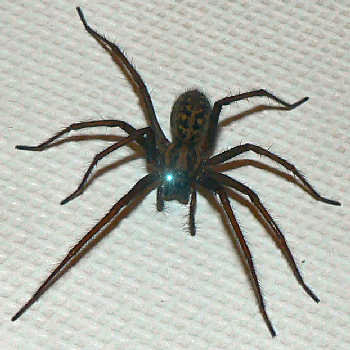 Henk is a robot designed and developed by Jose Fangjian, a computational psychologist. He was devised in order to explore phobic reactions in human subjects by deploying the phobic object into the periphery of an unsuspecting subject and observing his reaction. The observations themselves are of course conducted by Henk itself, without the need of a research assistant or other individual to observe.

Contrary to the appearance in the image to the right, Henk's eyes do not glow unless they are sending tracer data, as was the case when Fangjian took the picture.

Kevin Breeman first encountered Henk just after finishing some work in the science labs of the USS Independence-A. The initial encounter was less than pleasant and Henk soon realized that he had a good candidate for therapy.

Henk is a durable probing robot. His small size (about that of a medium-sized human hand) allows him to crawl into smaller spaces and his eight eyes each serve as a different sensor device. His name does not mean anything; it is not an acronym.

Each of Henk's eight eyes is an EM spectral sensor. Its first two eyes are optical sensors. The third eye is a laser acoustics sensor, allowing the robot to take sensitive measurements of vibrations in remote objects by beaming light rays at them and measuring discrepencies in return time. Henk also has a pair of infr-red eyes.

Henk's legs are equipped with accoustic and vibrational sensors, along with hairs that can be used to sense changes in air current. Other hairs have been distributed across his body for similar purposes

Henk's cephalothorax contains replicated fluid for hydrolic extension of his legs, as is the case with a real spider.

Henk is equipped with a standard 1 terraquad serial processor integrated with a 1 terraquad miniature neual gelpack parallel computer. As a result, the robot can learn and also perform efficiently the computations required in order to produce complex sensory maps with the data he acquires from the outside world.

Henk tends to spend a lot of his downtime "sleeping" in one of the beakers under one of the desks in the science lab. While doing this he uses the fluid inside his legs to make observations of neutrino emissions.