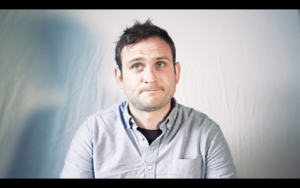 Hamsan Dwich (also known as D. W. Hamsan, born Stardate 236904.15, age 30) is a male Bajoran vedek, medical technician, and enlisted crewman in the Federation Starfleet. During his initial four-year stint in Starfleet, Hamsan served aboard Starbase 118, Deep Space 224, and the USS Resolution and attained the rank of Crewman 1st Class.

Hamsan resigned from Starfleet in November 2398 and resided in monastic seclusion at the Kaiett Monastery in Dahkur Province on Bajor. He re-enlisted the following year and currently serves as a medical technician aboard the USS Excalibur-A. Owing to his experience as a vedek, he also holds the position of ship's chaplain.

Hamsan Dwich was born in Dakhur Province, Bajor, in 2369, shortly before the end of the Cardassian occupation. Prior to the occupation, the Hamsan family were prosperous members of the mi’tino caste, which primarily comprised merchants and landowners. Like the vast majority of Bajorans, however, they abandoned their d’jarras to unify in opposition to Cardassian rule. Hamsan's mother Ity, an active member of the resistance, enlisted in the Bajoran militia after the occupation, while his father Guin opened a small shop. He and his two older brothers Dals and Serif enjoyed a relatively peaceful and happy childhood, despite the domestic instability on Bajor and the subsequent Dominion War.

Hamsan had long desired to devote his life to the service of others, and for much of his youth, he prepared to enter the clergy. As a teenager, he spent summers at the Kaiett Monastery in Dakhur Province, where he hoped to be accepted as a novitiate. In mid-2388, at a meeting with several ranjens and vedeks at the monastery, he was told that this pagh was meant to follow another path. This devastated him, and he felt lost for several years.

Hamsan completed his compulsory education on Bajor 2387. The following year, Bajor was admitted to the Federation, and after his dreams of joining the clergy were dashed, he took advantage of the opportunities to live and work off-world. After a short period living on Casperia Prime, Hamsan moved to the Sol system and settled on Luna, eventually training as an emergency medical technician and working for a hospital in Copernicus City. In 2395, he enlisted in Starfleet and after completing Academy training, was posted to Starbase 118. He transferred to Deep Space 224 in 2396, and was promoted to Crewman Second Class that year. In late 2397, he signed on for a tour of duty aboard the USS Resolution, working as an emergency medical technician in that ship’s sickbay.

In July 2398, the USS Resolution came under the control of a time-manipulating Q. The Q, named CloQ, subjected the ship and her crew to a bizarre temporal experiment, in in which they were forced to relive the same five minutes over and over. Hamsan was working in Sickbay when the experiment began, but traveled over to CloQ's ship with Meidra Sirin and Addison MacKenzie. When they began to damage CloQ's ship, CloQ spirited Hamsan to an alternate timeline where he became a Vedek and never joined Starfleet. Sirin, shitting between timelines, is shocked to discover that Vedek Hamsan has no memories of his other life. When the crew defeated CloQ, Hamsan was returned to Resolution, but as his alternate universe self. He struggled with his identity for weeks until visiting the Orb of Time on Bajor, at which point The Prophets restored him. He is now a fusion of both this universe's Crewman Hamsan and the alternate universe's Vedek Hamsan, with the memories of both.

In October 2398, during an evacuation of the USS Resolution, Crewman Hamsan successfully led the evacuation of sickbay, and managed to save Genkos Adea's dog, Toto, before leaving the ship in an escape pod.[1] After the destruction of Resolution and while on shore leave on Risa, Hamsan determined that the Prophets were calling him back to religious life. While the rest of Resolution's crew transferred to the USS Excalibur-A, Hamsan resigned from Starfleet and moved back to Bajor, whereupon he entered monastic seclusion at the Kaiett Monastery in his native Dahkur Province.

Hamsan is deeply religious, a devout follower of the Way of the Prophets. His favourite religious text is Yurba's Second Prophecy."

Hamsan met Lt. Kuppasoop and Ens. ch'Yves in 2396, shortly after begin posted to Deep Space 224. They started dating in mid 2396 and started a relationship. After about a year, Kuppasoop and ch'Yves decided to end the relationship with Hamsan and become a couple. They broke up with Hamsan in the queue at Subway Sam's.

Hamsan met Meidra Sirin shortly after being posted to the USS Resolution. They started dating in early 2398, and said they loved each other for the first time in April of that year. They began cohabitating in mid-2398. The relationship ended in late 2398, when Hamsan resigned from Starfleet and moved back to Bajor to resume religious life.