Tasks such as computer core maintenance, monitoring, and access; transporter monitoring; and ship's stores and quartermaster duties are all more efficiently coordinated from a central office. As well, personnel concerns such as duty rosters; quarters assignment; handling and transfer of personal effects; and recreational facilities scheduling can be addressed in a more private and discretionary forum than the bridge can allow.

Stock needs to be kept of all the ships' consumables and incidentals, and the Operations department will liaise with all other departmental heads to ensure that their needs are met. The Operations Office allows for a repository of record-keeping and needs management, as well as a convenient location for meetings to detail such needs. 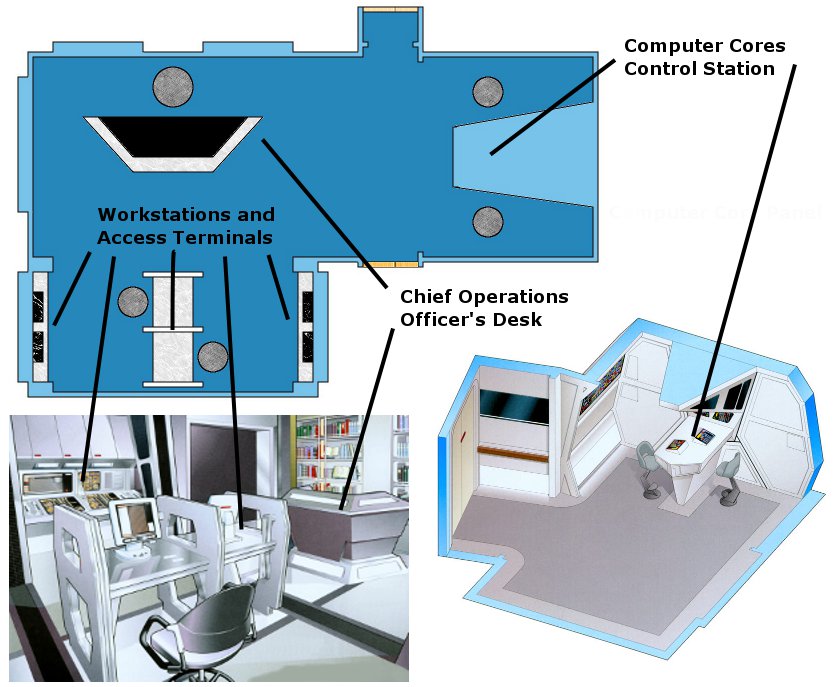 Upon entering the Operations Department office, directly to the right can be found the computer cores control station. Routine monitoring and diagnostics of the ship's two AC-16 bio-neural gelpack cores can be conducted from this workstation. Other systems under Operation's purview, such as the 16 discrete transporters, can be monitored from here as well.

The main feature to the left as you enter the Operations Department office is the Chief Operations Officer's desk. A multi-function LCARS display, it is infinitely customizable to reflect the needs of a busy and diverse department.

In the historical nautical period of Discovery's earliest namesake, the predecessor to the Chief of Operation's role would be covered by the Ship's Yeoman. This title, now relegated to purely a clerical or assisting role on a starship, meant much more on a sailing ship. The Ship's Yeoman was the keeper of the ship's log, recording navigational points, time, general notes, and a roster of the crew and officers. As well, he would also act as purser, in charge of docking fees and bills, and would tally the ship's stores. In deference to the clerical nature of this historical role, a series of bookshelves can be found behind the Chief of Operations desk. Within is contained several bound copies of ship documents, star charts, and technical manuals, if only for aesthetic purposes. The Chief of Operations often will store personal book collections and artifacts in these bookshelves as well. Currently, the majority of books to be found in the office are fictional or historical in nature, in keeping with the interests of the current Chief of Operations.

On the wall to the right of the Chief's desk, is a large situational display screen. It is used to display information useful during meetings and conferences, or can be used as a departmental 'whiteboard' for the display and dissemination of information among the Operations personnel.

Across from the Chief's desk is a large alcove, containing several specialized and multi-use workstations and terminals for departmental use. The day to day delegated functions can be conducted from these Operations-specific terminals.

The current Chief of Operations on the Discovery-C is Lieutenant Commander Eric Lundrigan. Common to the Operations Department Office is Chief Petty Officer James O'Connor, and Crewman Wilhelmina Murray.