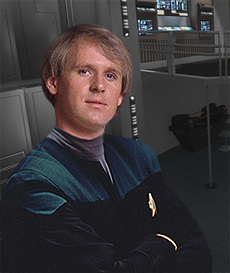 Ensign Chris Davies is a Medical officer serving aboard the USS Avandar.

He is an NPC simmed by Lieutenant Commander Jen Malcolm.

Chris Davies grew up with his mother in a small town on Prince Edward Island, where he helped her run a bed-and-breakfast for most of his childhood and teenage years. While he has a bit of a reputation for being too carefree and non-serious, he is actually quite good at his work in the field of pathology. He is very friendly, and though he spends most of his professional career hidden away in a lab, he finds as many excuses as possible to take a break from the microscopes and mingle with his co-workers. He also enjoys taking pretty women on dates and has vowed to remain a bachelor.