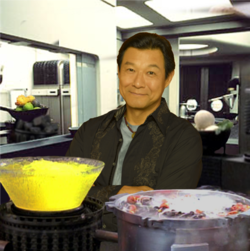 Aren in the kitchen

Aren, an El-Aurian, is currently a civilian chef aboard the USS Darwin-A.

Was born on El-Auria, their family was all engineers working on building space ships, and they just wanted to leave and have an adventure. They left their home planet when they reached maturity and went exploring. They went home every few years to visit until the Borg invaded in 2265. Their family all fled, but their ship was destroyed by the Borg. They have one living sister left Malka, who moved to a human colony in 2243 when she married a human, and joined Starfleet in 2320 after he died. Malka has a daughter named Ella. Aren really got into the whole cooking thing after their parents died, as a way to reconnect with home. They've since combined it with their quest for adventure, and have made it their mission to learn to cook as many different cultures' food as possible, and learn about the cultures in the process. Because of their eidetic memory, they have an enormous range of recipes in their head already, but they're always looking for more. They were joined for a while by a Trill, and had two children with him, but never married. After he died, his symbiont was joined to a new, younger trill. Aren remains friends with his new host, but he was less inclined to travel, so they have gone their separate ways. Aren met Iniko while jhe was a refugee, and Iniko thought they were the best because they could actually cook Laudean food, which jhe hadn't found anywhere else in the Federation.