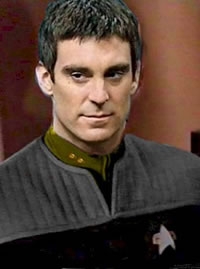 Xavier grew up in a lovely not Starfleet family. His mother and father both worked on farms and he never had any siblings. When he requested to his parents that he wanted to enter Starfleet academy, they were shocked. They had thought that he would want to stay and look after the farm. However, if they had of checked his schooling subjects, they would see he was far more interested in everything else but agriculture.

His years in the academy were well spent. He made a good many friends in the academy and he received top marks in many of his subjects. Xavier always had good co-ordination, he was captain of many of the academy sporting teams, and it was this ability that leads him into a helmsman career. He was an excellent pilot, thus leading his first posting to be behind the helm. While Xavier was content piloting a star ship, he always wanted to be at the heart of the ship. To be directing the operations, or to be using complex formula and configuring the warp core down in engineering. He was just as capable in both, only his piloting skills lead him first.

His first assignment was at starbase 23, piloting vessels during their shakedown runs, and also testing experimental improvements to vessels engines. A job most would be happy with, but Xavier wanted more; he wanted to get out and go explore space.

His first posting on a exploratory starship was the steadfast. A galaxy class refit, and for Xavier was an extraordinary ship to pilot. With his then current CO changing ships, his First officer took the crew to a new ship. The USS Walton, an akira class starship, one with formidable fire power.

Xavier's goal in Starfleet is to one day command his own vessel. He knows its still many years away, but his goal is still clear to him. His family still don’t understand his interest in space travel, but they have never been in space. To see their earth from orbit. That is one thing Xavier wants to change. He wants his parents to be proud of him, to understand why he must do what he does. He hopes someday he can.