Commodore Heather Westhaven is currently serving as the Commanding Officer of USS Comanche and the SST Task Force.

Born among the shipyard workers of Mars, Heather found the subject of starships and their technology fascinating at a young age. Her father, Harold, was able to take her up to the Utopia Planitia Fleet Yards often watch as ships were built and refitted. Her father worked as a team leader and conduit manager making sure that conduit for the computer systems were laid out properly for the ship.

When she turned eighteen, Heather applied to join the Starfleet Corp of Engineering as a laborer and was absolutely thrilled to weld and fabricate parts to be put on the ships in construction. She loved the life for two years before Lieutenant Commander Sutok recognized her talents and convinced her to join Starfleet under a mentorship program.

Four the next four years as an Ensign, Heather worked as an engineer with Sutok as she studied with the Starfleet Academy remote course, graduating in the middle of her class. She was immediately assigned to the USS Joshua Chamberlain as an Engineering Officer. She spent most of her junior years aboard this Oberth Class science vessel continually learning her job and making quite a bit of upgrades to the vessel on her own. This earned her the Chief of Engineering slot by only the rank of Lieutenant.

Her innovation and undying interest in new technology caught the eye of the newly formed Starfleet Sciences & Technology (SST) branch and had her transferred to Starbase 432 as a Technology Consultant. Her exemplary work earned her a ship under the SST branch, which had the responsibility of disaster recovery from experimental technology that malfunctioned.

Seeing the importance of this clean up, Admiral John Sterrett saw the need of a task-force to handle clean up, he promoted Heather to the rank of Commodore and assigned three vessels under her command to head any clean up operations.

Heather is a go getter who loves technology more than people sometimes. Her knowledge and expertise far outweigh her ability to socialize with others. This was something that her officers quickly got used to and though she loved her crew and did what was best, many times it was hard for her them to read her when she'd rather read a schematic then socialize with them.

She has taken her task-force to heart and spearheads any clean up operation. Starfleet has gotten used to the appearance of the USS Comanche after a disaster and have given up protesting her taking command of the situation. Most are happy to let her handle the paperwork and clean which freed other captains to explore.

Her favorite saying to her crew is, "Someone's gotta clean up after those first contacts." 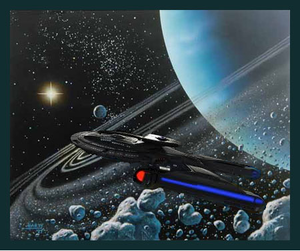 The USS Comanche is a Luna class starship outfitted with hazard tanks and geared for handling contaminated locations. What she lacks in weaponry, she makes up for with improved shielding and special equipment to handle areas that most starships would be in danger. The ship is usually docked at Starbase 2 unless a mission is ongoing and her captain has to be present.